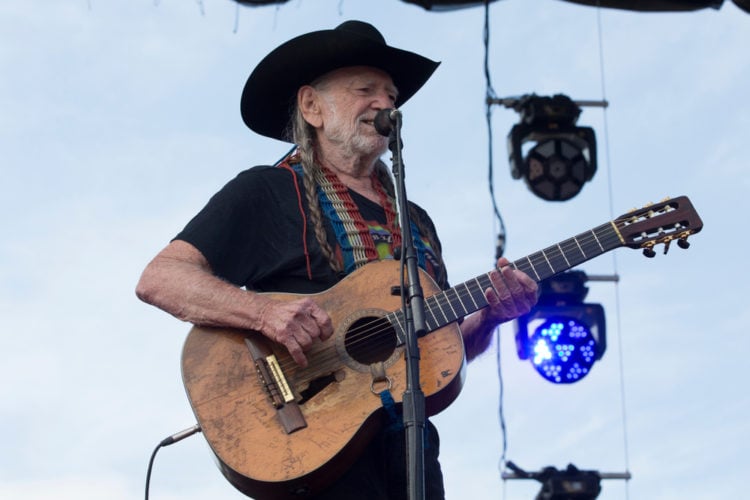 Whether you know him best as an activist, a musician, or an actor, Willie Nelson is unquestionably one of the most recognizable names in country music. Over a seven-decade career, he’s pioneered outlaw country, influenced the alternative country movements of the 80s and 90s, won countless awards, and released a jaw-dropping 95 studio albums. His album sales may have dipped slightly since the 90s, but he remains a vital figure in music, an icon whose appeal extends far beyond the genre in which he made his name and whose music resonates even with those with no interest in country. Here’s our pick of the 20 best Willie Nelson albums.

A year after releasing the sparse and spectacular Spirit, Nelson returned with Teatro, an atmospheric, drum-heavy album of quiet but unrelenting power. As Rolling Stone says, much of the album is just Willie quietly breaking your heart with his easygoing intensity, while even the weaker numbers are still moving enough to warrant a repeat listen.

Nelson and songwriter Kimmie Rhodes had teamed up for several performances dating back to 1996, but in 2003, they came together for a full album. The result is an immensely enjoyable, wonderfully intimate collection of acoustic songs that showcases the talents of two of country’s most talented outlaws. Key highlights include the emotionally wrought title cut and the Rodney Crowell classic Till I Gain Control Again.

18. The Party’s Over and Other Great Willie Nelson Songs

The Party’s Over and Other Great Willie Nelson Songs is exactly what it says on the label. 12 great songs, 12 stunning performances, and a record that, as All Music says, sounds incredible at 2 o’clock in the morning when you’re feeling reflective after a busy night. Released several years before Nelson made his commercial breakthrough, it didn’t trouble the charts, but it’s still a superb album.

A year after releasing the starkly beautiful Red Headed Stranger, Nelson returned with his nineteenth studio album, The Sound in Your Mind. The spare arrangements and understated intimacy of its predecessor had gone, replaced with a fuller sound, lush production and even the occasional up-tempo number. While not in the same class as Red Headed Stranger, it’s still a gorgeous, hugely enjoyable record, and an absolute must-listen for country fans.

Nelson’s daughter, Amy, was just five years old when she first heard Kermit the Frog sing Rainbow Connection in The Muppet Movie. For the next twenty years, she begged her father to cover it. Finally, in 2001, he relented. Amy, who by that point had become a musician herself, co-produced. Not only did the album please his daughter, but it also bagged Nelson a Grammy nomination for Country Album of the Year.

In early 1996, Nelson released his fourth studio album, Country Favorites—Willie Nelson Style. Consisting of a collection of country classics, the album’s sound was fleshed out with the help of country pioneer Ernest Tubb’s band, the Texas Troubadours, and Western Swing fiddler-vocalist Wade Ray. Nelson doesn’t contribute any original material – stellar though his songwriting is, it’s not missed here, is it’s the familiarity of the standards combined with Nelson’s unique vocals that make the album the treasure it is.

14. To Lefty from Willie

Nelson’s tribute to country icon Lefty Frizzell is a beautiful thing. To Lefty from Willie was originally recorded in 1975 but Colombia decided to cling on to it for two years. When it was finally released in June 1977, it had matured like a fine wine, with Nelson showcasing his talents as an interpreter with a sizzling collection of country covers.

When you put Willie Nelson and Merle Haggard together in the same room, you’re going to get a hit out of it. In 1982, that’s exactly what Epic got with Pancho & Lefty. Both Nelson and Haggard were are their creative peak at the time of recording the album, and already established figures on the scene. Pancho & Lefty didn’t dent their reputation one little bit. If anything, it exceeded expectations, elevating both artists to two of the best-selling and most critically acclaimed musicians in country.

12. Somewhere Over the Rainbow

Willie Nelson has never been afraid of risk and in 1981, he took a big one for his twenty-sixth studio album. Veering away from his usual country style, Somewhere Over the Rainbow features a collection of pop standards from the 1940s. The acoustic jazz instrumentation was intended as a tribute to Nelson’s hero, Belgian gypsy jazz guitar virtuoso Django Reinhardt, who Nelson has cited as a major influence on his guitar style. Released in February 1981, it hit No 1 on the Billboard Top Country Albums and No. 31 on the Billboard 200.

As Live About notes, Waylon & Willie, a collaboration between two of country’s biggest outlaws, Willie Nelson and Waylon Jennings, is one of the best-selling albums for both artists, even years after its release. In the US, it spent a staggering 126 weeks on the country charts, ten of which were at No. 1. Poignant, fun, and just a tiny bit loopy, it’s a must-listen for fans of either artist.

For his fourteenth studio album, Nelson called on the help of a few old buddies. Don Was, Paul Simon, and Roy Halee produced, and David Crosby, Kris Kristofferson, Sinéad O’Connor, Bonnie Raitt, Bob Dylan, and Paul Simon featured as guest vocalists. Hugely ambitious and expertly executed, it’s a triumph, showcasing the jaw-dropping breadth of Nelson’s talents as both a writer and interpreter. Each song is delightful, but Nelson and Sinéad O’Connor’s rendition of Peter Gabriel’s Don’t Give Up is particularly astonishing.

In 1992, Nelson released his thirty-ninth studio album. Recorded in order to pay his tax debt with the Internal Revenue Service, the aptly titled The IRS Tapes: Who’ll Buy My Memories? featured Nelson, a guitar, and some of his finest songs to date. Described by All Music as “one of Nelson’s most direct and affecting albums,” it was a commercial and critical hit… most crucially, it generated over $3 million towards Nelson’s IRS bill.

For his forty-fourth studio album, Spirit, Nelson dialed back the instruments to just a piano, a fiddle and two guitars and dialed up the Spanish influence. It didn’t get much attention, and what little it did get wasn’t particularly kind. But make no mistake – Spirit is a big, bold record that showcases Nelson at his best. The songs are sparse to the point of skeletal, cutting straight to the bone of what Nelson is trying to express. Nelson’s weathered vocals suit the album’s tenor perfectly. Unsettling it may be, but it’s all the more compelling for it.

At the height of his commercial success in 1976, Nelson decided to mix things up with an all-gospel album. Obviously, a gospel album by Willie Nelson isn’t going to sound like any regular gospel album, and The Troublemaker certainly isn’t that. A free-spirited, free-wheeling record that breathes new life into old standards, it’s an unmitigated joy. The songs might be familiar, but in Willie’s hands, they sound fresh and spontaneous. An immensely satisfying record, and an irresistible highlight of Nelson’s back pages.

Yesterday’s Wine, Nelson’s thirteenth studio album, came at a low point in Nelson’s career. His album sales were lackluster, he’d failed to deliver any significant hits, and his finances were shot. His personal life wasn’t doing any better, as he’d recently divorced his wife and lost his Tennessee ranch in a fire. Commercially, Yesterday’s Wine didn’t improve matters – it failed to chart and prompted Nelson to retire (albeit briefly) from the music industry. For all of that, it’s still an outstanding record, with each song ranking as a minor masterpiece.

Described by Return of Rock as an “instant classic,” Shotgun Willie showcases the very best of Nelson’s songwriting abilities. It didn’t do very much in the charts, peaking at No. 41 on the Billboard Top Country Albums, but it was a critical smash, with Rolling Stone calling it “flawless” and saying that Nelson “finally demonstrates why he has for so long been regarded as a Country & Western singer-songwriter’s singer-songwriter”. Despite its poor sales, it became Nelson’s breakthrough album, awakening the interest of a younger generation and establishing him as a pioneer of the outlaw movement.

In 1962, Willie Nelson introduced himself to the world with his debut studio album, . . . And Then I Wrote. Artistically diverse, wonderfully straightforward, and with a lyrical inventiveness that would have made Hank Williams proud, it’s a remarkable debut. The instrumentation might be rudimentary, but if anything, it only serves to enhance the quality of the lyrics. Only one single – Touch Me – was released, but it was a success, peaking at No. 7 on Billboard’s Hot Country Singles.

After making his name as a figure in outlaw country music, Nelson pulled a 180 with Stardust. When he approached Colombia about making a record consisting entirely of pop standards, they thought he was joking. He wasn’t. Ten days after hitting the studio, he emerged with a perfectly conceived, perfectly packaged piece of pop gold. Any doubts the record label still had were quickly swept away when the album soared to No. 1 on Billboards Top Country Albums chart and No. 30 on the Billboard 200. The album spent ten years in total on the Billboard’s Country Album charts, eventually certifying quintuple platinum. In 2015, it was inducted into the Grammy Hall of Fame.

When Nelson signed up to Colombia Records in 1975, they gave him complete creative control. The result was Red Headed Stranger, a concept album about a fugitive on the lam after killing his wife and her lover. When Colombia first listened to the record, they thought it was a demo, so stripped back and sparse was the sound. But Nelson knew exactly what he was doing, and so did his fans – released in January 1975, the album soared to No. 1 on the country charts, No. 28 on the Billboard 200, and turned Nelson into one of the biggest stars in country music.

As texasmonthly.com says, commercial success isn’t always the yardstick by which to judge an album. When Phases and Stages hit the shelves in March 1974, the album stalled at No. 34 on Billboard’s country albums chart, while only one of its three singles, Bloody Mary Morning, charted in the Top 20. But commercial failure aside, this is as close to a perfect record as it’s possible to get. A concept album that tells the story of a divorce from both party’s perspectives, it’s compassionate in message, cinematic in scale, and without question, one of the finest concept albums of all time.

The Prince of Darkness has had a career spanning 54 years, releasing 22 studios as part of Black Sabbath and his own solo band. While he is winding down his work due to health reasons,…