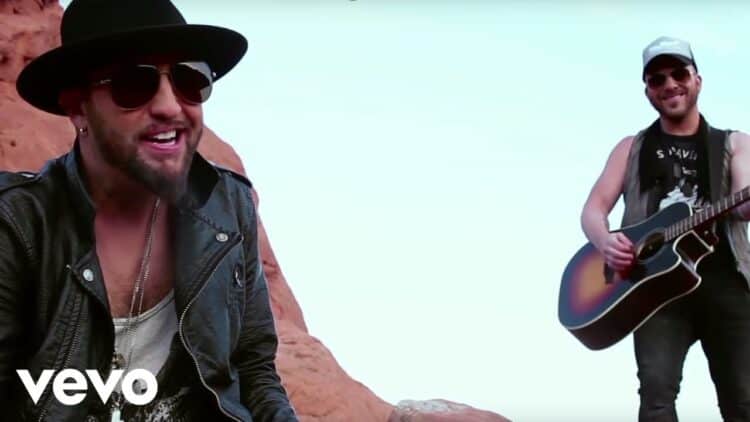 Locash (formerly Locash Cowboys) is made up of Chris Lucas and Preston Brust. They have become one of America’s most legendary country music duos. Like most artists, the journey to success has not been easy for these talented singer-songwriters. Each spent years building their musical career until they crossed paths in 2002 at Wildhorse Saloon, Nashville. At the time, Lucas was a dance instructor and an MC at the Wildhorse club. While hosting, he spotted Brust among the crowd. Drawn by his style of music, Lucas got him a job at the same club, where they started working together. Their urge to sing and create a following compelled them to seek other opportunities. While each achieved great results on their own, their second album, Locash Cowboy, released on Average Joes, was their breakthrough as a duo. Since then, they have released numerous critically- acclaimed hits via different labels. Below are some of the greatest Locash songs you may add to your playlist.

Sometimes you don’t know how much someone means to you until they’re gone. This song is what you need to tell that special person how you miss them. It is the fifth single from ‘The Fighters’ album, penned by Preston Brust with the help of Pete Good and Michael Tyler.

Do you have a close friend who can stand you even in your worst? Play them this song. Let them know that they are God’s sent angel into your life. The lyrics in this eighth single of the duo’s third album, “The Fighter, ” summarize a true partner’s virtues, emphasizing what holds a friendship together. The song was written by the Locash pair with the help of Phil Barton and Matt Alderman.

Nothing gives life a meaning like having someone who wishes you the very best in all your endeavors and is willing to offer a helping hand whenever you need one. This song can convey different messages, depending on how you interpret it. If played by a parent, it could be a way to express their hope for their child’s success. It can also be about letting go of a friendship or a simple good wish message to a friend. The unpredictability of the message in this song is similar to what makes the journey of life fascinating. You only need to be smart enough to do your best at the moment and hope for a better future. The song is the eighth single from the Locash Cowboy album written by Chris Lucas, Jeffrey Steele, and Preston Brust.

Are you compiling a party music playlist? Here is one of the best songs to get everyone in a party mood. The song talks about taking it easy and having fun at the party. It is a single from the duo’s fourth album, ‘Brothers,’ penned by Chris Lucas, Tyler Hubbard, Preston Brust, and Corey Crowder.

Keep In mind is a relatable song in the lives of many. It echoes the life of Preston and Chris. How they left their hometown hoping the world would present them with the best openings to nurture their talent and grow their brand. They both had their struggles along the way. They met by chance, took the risk, and became the most celebrated duo. You never know who you’ll encounter in life or the challenges you’ll face, but be smart enough to make the right choices in your day-to-day interactions. The song was composed by Shane Minor and Jeffrey Steele. It is one of the singles on the duo’s debut album the ‘Locash Cowboy.”

Chase A Little Love is a ballad that will make your romantic road trip memorable. The lyrics will spice up your moment together as you adventure and explore your feelings for each other. Preston Brust and Jaron Boyer co-wrote the song. It is the second single from the duo’s debut album, ‘Locash Cowboy.’

Penned by Ashley Gorley, Hardy, and Jesse Frasure is this single from Locash’s third album, Brothers.’ It talks about common aspects of humankind’s existence, touching on work-life, fun, and love stories. The song was released in 2019, topping the Canada Country Song chart and peaking at number two on the US Country Airplay chart.

3. Ring on Every Finger

Looking for the right song to affirm your love and convey your intentions and standing in a relationship? Here is a great hit from the duo’s third album ‘The fighter.’ The song’s writers, Josh Kear, Jesse Frasure, and Thoma Rhett’s lyrics will do the talking and get your romantic message home. It’s one of Locash’s infectious songs and the best single to conclude their third album.

I Know Somebody is the perfect song to express your love for that girl who seems like a newcomer in your neighborhood. It is the third single from their fighter album released in 2016, peaking at no. 1 on the US Country Play chart and no. 4 on the Billboard Hot Country Songs chart. This song was the duo’s first county hit to debut no. 1. It was composed by three songwriters, Jeremy Stover, Rhett Akins, and Ross Copperman.

Here is a song that will remind you to learn to appreciate every phase of your life. It reminds us that our humble beginnings contribute a lot to our future success. The lyrics teach us the importance of embracing every struggle along the way and loving everything that the universe has to offer. This remarkable duo wrote this song with the help of Danny Myrick and Chris Janson. The song charted on the County Airplay charts and the Music Row Country Breakout chart, peaking at number 2 and number 1. This first single from ‘The Fighters,’ their third album, was their first hit to rank top 10.

Do you have any Locash song(s) in your playlist? These ten greatest hits would make an excellent choice. They are among the best songs about gratitude, love, and optimism. They will remind you what to seek to help lead a more fulfilling life, including honesty, support, true love, happiness, and a positive attitude. These American singer-songwriters’ catchy tunes have a powerful message, making them worth listening to.