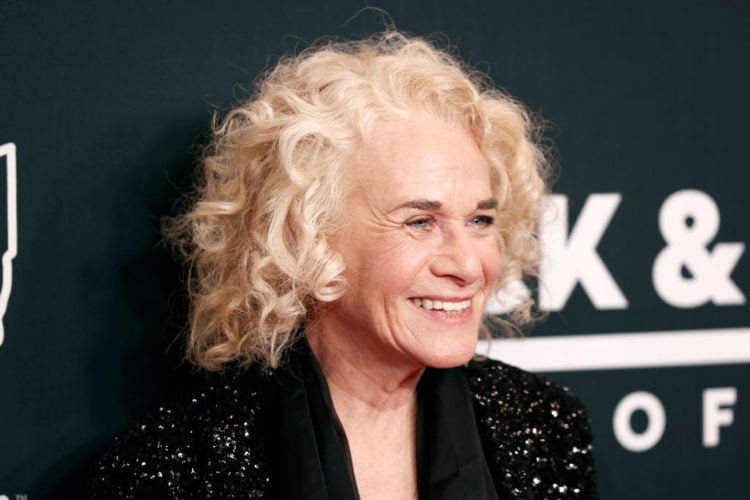 Born as Carole King Klein in 1942, the New York-born and raised singer-songwriter first learned how to play the piano when she was still a small child. It was discovered by her parents her ability to identify a musical note with precision without an actual reference tone to go on. This rare talent was instrumental in shaping the young lady to become who the world knows better today as Carole King. At seventeen years of age, Carole King wed Gerry Goffin and had her first child, Louise Goffin. This was shortly after her first studio recording, The Right Girl, which was used as a promotional song at the time. After the couple quit college to support their child, it wasn’t long before both King and Coffin engaged in full-time songwriting. By 1968, the couple divorced and King, who was now making a name for herself as a singer and songwriter, took what were now two daughters with her to California. This move ultimately carved out a path for Carole King to evolve into one of the most beloved songstresses of all time.

The impressive career Carole King enjoyed saw a 1995 tribute album dedicated to her by a lineup of world-class musical artists who all credited her for the inspiration they received to get into the entertainment industry themselves. King was also inducted Songwriters Hall of Fame, as well as in the Rock and Roll Hall of Fame twice and was a 2013 recipient of the Gershwin Prize from the Library of Congress. In 2015, she became an honoree by the Kennedy House for her contribution to the music industry. King’s career has seen seventeen studio albums to her credit, as well as nine compilation albums, five live albums, and a soundtrack. She has also received four Grammy Awards for her performances.

Of all the studio albums Carole King produced, 1983’s (Speeding Time) was the first not to earn an official chart rank of any kind. It was received the most amount of unfavorable reviews as none of the music critics seemed to care for it. Furthermore, its release came at a time when a new wave of pop music was drowning out artists like King, who had already been heavily criticized since 1977 for not coming up with the same star-quality material she started out with.

(Touch the Sky) was Carole King’s tenth studio album, which was released in June 1979. The reviews issued by music critics were not favorable. On three different album charts, Touch the Sky ranked at its best in Canada at number sixty-two, then it was at number eighty-four in Australia, and finally at 104 on the US Billboard 200. AllMusic gave the album a two-star rating. There were no singles released from it, nor any standout songs that won enough attention to be talked about.

(Welcome Home) was released in May 1978 as Carole King’s ninth album and was better received in Australia than it was in America. On the album charts, it was ranked at number sixty-nine on the Kent Music Report and at 104 on the US Billboard 200. It also received only two stars out of five from the critics of AllMusic. There was one single released from Welcome Home that did chart, which was (Morning Sun) as it appeared at number forty-three on the US Billboard Adult Contemporary chart.

Carole King’s twelfth studio album, (One to One), was released in 1982 and received unfavorable ratings by the music critics. There was one hit single that did come from it, namely (One to One), which performed at its best on Canada’s Adult Contemporary chart. On the US Billboard Adult Contemporary chart, the song peaked at number twenty and charted at number forty-five on the US Billboard Adult 100.

(Love Makes the World) was Carole King’s sixteenth studio album, which was released on September 25, 2001. Just prior to the album’s release, King appeared in a number of televised advertisements for the clothing company chain, Gap. The songs featured in those commercials came from the album’s title track. (So Far Away) was performed by Carole King’s daughter, Louise Goffin. From negative to mixed reviews, Love Makes the World did not sell well in the United States. It did see better commercial success from Japan and the UK, but not enough to earn any certifications from their respective music industries.

12. Color of Your Dreams

The Grammy-nominated single, (Now and Forever), was featured in the 1992 film, A League of Their Own, which served as a contributing factor to Carole King’s fifteenth studio album, (Color of Your Dreams), receiving slightly better reviews. At least this was according to Rolling Stone Magazine as it gave the 1993 album four out of five stars. However, AllMusic was less generous by only giving two stars. In Australia, the Kent Report ranked Color of Your Dreams at number seventy-two on its album chart. Getting back to the single, Now and Forever, it managed to peak as high as number eighteen on the US Billboard Adult Contemporary chart and was the final hit single King realized from any of her studio albums.

After a six-year hiatus from the fickle music industry, Carole King returns with the release of her fourteenth studio album, (City Streets), in 1989. The title track became a number fourteen hit on the US Billboard Adult Contemporary chart, as well as making a number seventy-four chart appearance in Australia, and a number ninety-two chart appearance in Canada. Overall, the critical rating of the album was mixed at best and it was not a commercial success.

Released on November 1, 2011, (A Holiday Carole) became Carole King’s seventeenth studio album. It was also the first she produced in a decade and has not since released another studio album since then. Designed specifically for the Christmas holidays, the album did well as King’s fans scooped it up to join the rest of their Carole King collection. In Australia and the UK, the album is titled A Christmas Carole.

In May 1970, Carole King made her official debut as a solo artist through her first album, (Writer). Already popular as a songwriter at this point, the introduction of King’s vocal talent seemed to put the world on notice she can sing just as well as she can write. Although the overall review of her album only saw a three out of five-star rating from music critics like AllMusic, there was a mutual agreement that a bonafide star was in the making.

8. Pearls: Songs of Goffin and King

The eleventh studio album recorded and released by Carole King was (Pearls: Songs of Goffin and King). In 1980, the cover song, (One Fine Day), peaked at number eleven on the US Billboard Adult Contemporary chart and at number twelve on the US Billboard Hot 100. It was also popular in Canada, peaking as high as number two on its Adult Contemporary chart. The album did receive favorable reviews with AllMusic giving it a four out of five-star rating.

(Simple Things) was Carole King’s eighth studio album, which was released in July 1977. It was also the final studio album that became certified gold by the Recording Industry Association of America (RIAA). Overall, the album did not receive favorable reviews by the critics as it received only two stars out of five by AllMusic. However, its first single, (Hard Rock Cafe), did become a globally successful hit as it peaked as high as number eight on the US Billboard Adult Contemporary chart and at number ten in Australia. It was a top forty hit among the nations of Austria, Canada, Belgium, New Zealand, and Switzerland. The second single from the album was the lead single of the same name, which charted as high as number six on Canada’s Adult Contemporary chart and appeared at number thirty-seven on the US Billboard Adult Contemporary chart.

In June 1973, Carole King released her fifth studio album, (Fantasy). Thanks to her loyal fan base, the album earned a gold certification from the RIAA in sales and peaked as high as number six on the US Billboard 200. The overall reviews of the album were mixed as Rolling Stone Magazine gave it a thumbs down while AllMusic gave it a three out of five-star rating. There were three singles that came from the album, starting with (Believe in Humanity). The song charted at number twenty-eight on the US Billboard Hot 100, which faired better than the second single, (You Light Up My Life). (Corazon) was Fantasy’s third and final single, which charted on the US Billboard Hot 100 at number thirty-seven. On the US Billboard Adult Contemporary chart, You Light Up My Life performed better as it peaked at number six while Corazon peaked afterward at number five.

(Rhymes & Reasons) was released in November 1972, becoming Carole King’s fourth studio album. The single, (Been to Canaan), was a chart-topping hit on the US Billboard Adult Contemporary and charted at number twenty-four on the US Billboard Hot 100. It also earned a gold certification from the RIAA, as well as peaking as high as second place on the US Billboard 200 albums chart.

Carole King’s third studio album, (Music), was released in December 1971 and sold well over one million copies on the day of its release, which resulted in it achieving platinum certification when the RIAA first introduced the classification in 1976. The single, (Sweet Seasons), peaked as high as number two on the US Billboard Adult Contemporary chart and at number nine on the US Billboard Hot 100. Music peaked at number one on the US Billboard 200 as an album by New Years Day of 1972 and remained there for an impressive three weeks.

(Tapestry) was Carole King’s second studio album, which was released on February 10, 1971. In 1972, it won Album of the Year by the Grammy Awards, as well as Best Female Pop Performance. Its number one hit singles, (It’s Too Late) and (You’ve Got a Friend), also earned Grammies for Record of the Year and Song of the Year, respectively. With over twenty-five million copies sold worldwide, Tapestry has become one of the best-selling albums of all time. The RIAA certified Tapestry an astonishing thirteen times over and as of 2020, Rolling Stone Magazine has ranked the album at number twenty-five out of the list of 500 greatest albums of all time. Additional certifications Tapestry has received have been eight times platinum in Australia, double platinum in the UK, single platinum in New Zealand, and gold in Japan. In 1998, Tapestry was inducted into the Hall of Fame, which later saw the two mentioned singles do the same in 2002.