The Charlie Daniels Band were inducted into the Country Music Hall of Fame in 2016. Best known for their landmark fiddle epic “The Devil Went Down to Georgia”, this was a band that crossed boundaries, deflated stereotypes, and broke new ground. As the front man of his namesake band, Daniels was an incredible multi-instrumentalist and a founding member of the purely American artform known as “Southern Rock”. Sadly, Charlie Daniels was unexpectedly called home in July of 2020. He was 83 years old. In November of 2020, the 54th Annual Country Music Association Awards began its program with a fitting tribute to the recently fallen legend.

As a man of faith, Charlie believed in a power greater than himself and exuded an intense American patriotism. Over his six decades as a professional musician, he was not shy about expressing his views. Sometimes controversial but never brash, these are the Southern Rockstar reflections of the legendary Charlie Daniels.

On his musical influences:

“When I first started playing, I got into Bluegrass music and, of course, it was Bill Monroe, Flatt & Scruggs, Reno & Smiley, Stanley Brothers and those people. And then about the time Elvis came along and Jerry Lee Lewis and Carl Perkins and those guys, I got into that kind of music. And then later on, of course, the groups. Oh gosh, The Allman Brothers were one of my all-time favorites, Eric Clapton. You know, the musical groups and the musical people. Bob Dylan”.

“I didn’t start as early as some. I was about 14 or 15 when I first learned chords on the guitar. I’ve played almost every instrument with strings at one point in time, but I’ve stuck with the fiddle and guitar.”

“If I try to start listening to a country radio station, after a while, I’ll sit there and realize I’m not listening anymore. It’s like muzak. It’s part of the background. It’s faded into the background because it starts to be immobile, it starts to be the same type thing. And then Zac Brown will pop up or somebody that’s different, and it gets your attention back again. And then it falls back into sounding like the same singer. I’m not saying this to be critical…I could not pick out one artist from another most of the time because the voices sound the same. And the digital process has gone a long way in promoting that”.

“Well, we’re in there performing. I wasn’t doing any dancing or anything. There was a lot of authenticity in that movie that gets bypassed a lot of time. And I thought they did a great job of it. And they tried to keep the music authentic too. We were honored to be included in it…It was a big social sort of thing. John Travolta was just coming off of Saturday Night Fever and he was a huge teenager star. And so, I think what it did was it legitimized country music in the eyes of a lot of people that never had looked at it…People said, ‘I want some of that. I’m gonna learn to do a two-step. I’m gonna get me a cowboy hat and a pair of boots,’ and they did; people wearing cowboy hats and boots around New York City, coming to our concerts.” The same year that the Charlie Daniels Band made their cameo in “Urban Cowboy”, they released “The Legend of Wooley Swamp”. It remains one of the finest southern rock story songs to this day.

“That I was able to consistently keep 40 people employed for over 40 years”.

“Forget luck. Make sure that’s what you want to do and that you’re willing to make sacrifices. Because this isn’t gonna be easy. There’s no yellow brick road. There’s no charts, no maps to get you where you want to go. And never look at the empty seats. That’s like saying, ‘don’t be concerned with who’s not out there, you’re concerned with who is there’…You have got to go on stage every night regardless of who’s sittin’ out there, and you’ve got to put your very best into it. You entertain them. You do the best you can for them. Next time they come back they’ll probably gonna bring somebody else with ‘em. That’s how you build a following…And don’t lower the ticket price. People bought tickets to see you entertain them, go entertain them. That’s what its all about”.

“I would be lying to you if I told you I had never done any of that, because I have, but– I have never had a problem with it… I found out early on that you cannot party all night and sleep till four o’clock in the afternoon and get up with a fuzzy head and do a good job. So, you decide, do I want that, or do I want a career? If you want the career, you say, ‘Well, you know, we got to moderate on this drinking and whatever else.’ I don’t do drugs at all.” As Charlie said, his strongest addiction was that to music and “nothing was gonna separate me from that desire. Not Jack Daniels, not cocaine, not any kind of drug or anything. Nothing was gonna keep me from that.”

On losing Hendrix and Joplin to drugs:

“I’ve seen some incredibly talented people that went the wrong way. I saw Jimi Hendrix about two weeks before he died at the Isle of Wright. I was working there with Leonard Cohen. I was playing backup for Leonard. And to think about this guy, still on the side of the stage and watching him perform and to think about this guy that died from drugs. Think about Janis Joplin, you know, that had the world by the tail. And they threw it all away for cocaine or mandrax is what Jimi got into and all that stuff. It’s just not worth it. There’s lessons to be learned by that as you can only push this thing so far. The more you do, the more you’re gonna want to do and you’re gonna finally end up either without a career or could well end up dead.” In 1983, the Charlie Daniels Band released “Every Time I see Him”. The song describes the broken life of a man ruined by drugs accentuated by Charlie’s signature southern rock sound and nasty guitar licks.

On Bob Dylan and nine words:

“When Dylan came to town to do Nashville Skyline, they booked 15 recording sessions to do the entire album. They had a really good guitar player booked but he couldn’t make the very first one, so they asked me to come in a fill in for him, which I did. I was playing guitar and I literally hung on everything that Dylan did. Every chord he played, every note that came out of his mouth I was sitting there looking at him. And when the session was over, I was picking my gear up, I was fixin’ to leave, and Dylan asked [producer] Bob Johnston, ‘where’s he going’? He said ‘he’s leaving; I got another guitar player coming’. And Bob Dylan said nine words that changed my life. He said, ‘I don’t want another guitar player. I want him’.”

“Songwriting is a God given talent. It’s always there. It’s like an engine you have to start up like you have to turn a switch on. For me, it takes something like a good guitar riff or maybe just a line…I’m an unorthodox songwriter. I keep a guitar and a fiddle within easy reach wherever I happen to be. If I come up with something on the guitar I feel I should keep, I record it on my phone and go back to it later on. Or I may get a lyric idea first and flush it out with a tune. But I learned a long time ago you never throw anything good away. I have kept songwriting ideas for as long as fourteen years in my mind”.

On supporting the troops:

Charlie Daniels was intensely sensitive of the sacrifices made by American troops. He made numerous trips to entertain them in the likes of Iraq, Afghanistan, Bosnia, Kosovo, Korea, Kuwait, and Guantanamo Bay. Per journalist Madeline Osburn: “With his manager, David Corlew, Daniels co-founded The Journey Home Project, a non-profit organization dedicated to supporting and improving the lives of American veterans. The Journey Home Project has raised more than $1 million to give to veterans, veteran programs, and charities, with $50,000 going to Vanderbilt University Medical Center for research on a unique kind of cancer that targets veterans and affects all their organs. For [his] last four years, nearly every day, Daniels would tweet the message, “22 VETERANS COMMIT SUICIDE EVERY DAY!”

“I don’t do politics on stage. I don’t believe in it. I hate to see somebody playing and they bring some political thing up. My attitudes and my feelings, that’s my place where I vent my feelings…They don’t pay money to come to a political rally. That’s just not the place for it. It’s about music. It’s about entertainment”.

On America and the Military:

“I was five years old when Pearl Harbor was bombed. My first real poignant memory is a Sunday over at my granddad’s house and the radio was on… and this program was interrupted… and they started talking about what had happened, that they had bombed our naval base there…We were very vigilant, but we were always aware of our troops. That’s why I have such a great appreciation and love for American military because we knew they were out there saying, ‘To get to them, you got to come through me and that ain’t going to happen’…The only two things protecting America is the grace of God and the United States military”. 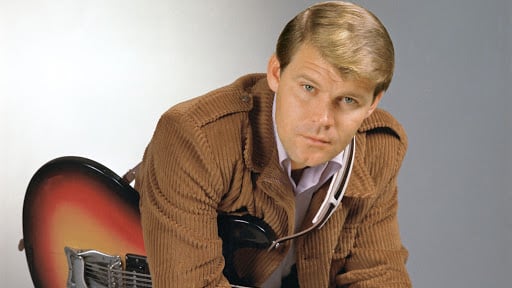 Glen Campbell was one of the most influential music artists of the last 60 years. Born in Arkansas in 1936, he got his start as a session musician in Los Angeles playing guitar for the…