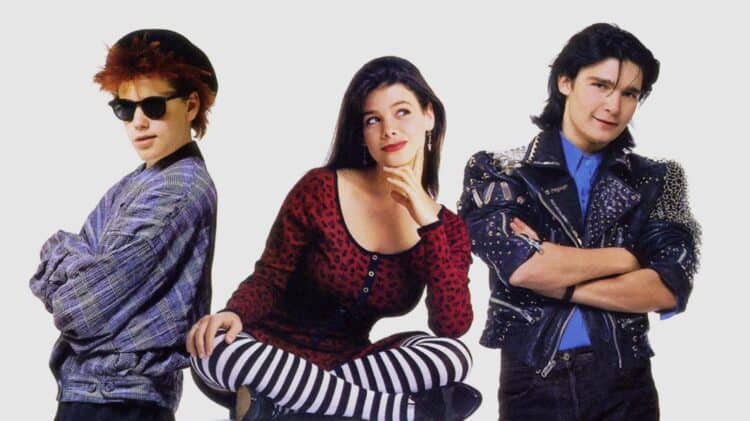 In 1989, Dream a Little Dream starred Corey Feldman, Corey Haim, and Meredith Salenger in a romantic comedy that had a bit of fantasy embedded into the storyline. Directed by Marc Rocco, the tale revolved around Bobby Keller (Feldman) as an underachieving high school student who accidentally collides with his high school crush, Lainie Diamond (Salenger), one fateful evening. As luck would have it, there was a couple experimenting with a meditation practice that caused the collided teenagers to lose consciousness. The couple was an elderly professor, Coleman Ettinger (played by Jason Robards), and his wife, Gena (played by Piper Laurie). Timing had it all four of these characters experience a switching of their bodies and consciousness. For Keller, he woke in the body of Ettinger while Ettinger found himself stuck in Keller’s. All of this manifested while Keller is in a dream state that had been generated by Ettinger’s subconsciousness. In the storyline, there is a time limit to fix the damage and put everything back to normal. Accommodating the movie’s theme was a collection of music to add more impact as a means to fully captivate the audience, scene for scene. As for the soundtrack, the mix of classic music and popular songs of the 1980s was featured in its collection of eleven tracks.

Chris Thompson’s (Never Turn Away) was an energetic song that hinted a bit of Animotion’s hit single, Obsession. In this lyrical performance, Thompson warns not to turn away from something without seeing it through first. Much like the rest of the soundtrack, (Never Turn Away) was loaded with energy, making this an easy favorite to also get up and dance to.

10. Whenever There’s a Night (performed by Mike Reno)

Loverboy’s Mike Reno brought forth the song (Whenever There’s a Night) which beautifully illustrated just how talented the singer really is. Written and performed specifically for the movie, this was a solo project performed by Reno, setting it aside from his time as Loverboy’s frontman.

(You’d Better Wait) was an awesome jacked-up song by Fee Waybill as a lyrical reminder to his loved one she would meet with regret if she opted not to wait for him. Fans of The Tubes will recognize Waybill’s lyrics as he was the frontman for the band since 1972. The height of their success came when their hit single, She’s a Beauty, rocked straight to the top of the US Billboard Mainstream Rock Songs chart after it was released as a single in 1983.

Lone Justice’s (Dreams Come True) was nothing short of fantastic as a song. Released in 1986 with the group’s album, Shelter. Sung by Maria McKee, the woman’s vocal talent was nothing short of stellar. For the soundtrack, this movie was a great addition given what the storyline of Dream a Little Dream was about.

Super fast and super energetic, (Time Runs Wild) definitely threw in that race to the finish feels like the entire point behind Dream a Little Dream was to race against time in an effort to fix an experiment that went wrong. Time never stops for anyone, no matter how hard we try to force it to do otherwise. Fans may recognize Wilde as the founder of the popular 1970s power-pop band, The Quick. In 1981, the group changed its name to Great Buildings before Wilde opted to go solo in 1986. In 1988, he released the album, Any Man’s Hunger, which featured (Time Runs Wild) on it. Although it was not released as a single, the power he put into this song as a vocalist was enough to make it an easy, move as fast as you can favorite.

6. Dream a Little Dream of Me (performed by Mickey Thomas)

The first of two versions of (Dream a Little Dream of Me) was a quicker-paced performance by Mickey Thomas. In the movie, it was played during the opening credits. On the Dream a Little Dream Soundtrack, it was the first of eleven tracks featured on it. Both of these versions have the roots of this song dating back to 1931 when Ozzie Nelson was the first to record it. It has since become a pop standard. The height of this song’s popularity came in 1968 when The Mamas & The Papas released it as a single. In Australia, it was a number one hit at that time. On the US Billboard Hot 100, it peaked as high as number twelve. As for the version performed by Thomas, it did not enter any of the official music charts but it is a favorite among the fan base of 1980s music.

5. Into the Mystic (performed by Van Morrison)

Classic Van Morrison, (Into the Mystic) was, and still is, a gem of a song that had Morrison at his lyrical best. The appreciation of life for the mystical wonder that it is was so softly played in this song that if one wanted to pick a perfect meditation song just to ease into, this would be it. This song came from his 1970 album, Moondance, which served as one of the best-recorded works credited to this talented artist that has become such an icon among fans of classic rock music. The theme of Dream a Little Dream dealing with the astral realm allowed (Into the Mystic) to serve its purpose as a meditative number in the movie and in the soundtrack as well.

3. I’ve Got Dreams to Remember (performed by Otis Redding)

Otis Redding is a legend, plain and simple. His (I”ve Got Dreams to Remember) is an absolutely beautiful song that not only did the movie Dream a Little Dream justice but the soundtrack as well. When (I’ve Got Dreams to Remember) was released as a single in 1968, it became a number six hit on what is now known as the US Billboard Hot R&B/Hip-Hop Songs chart. On the US Billboard Hot 100, it charted as high as number forty-one. Just like Redding himself, this song is an immortal classic.

2. Dream a Little Dream of Me (performed by Mickey Thomas and Mel Torme)

During the closing credits of Dream a Little Dream, this version of (Dream a Little Dream of Me) was a dual performance shared between Mickey Thomas and Mel Torme. The contrasting vocals between these two talents are what made this song feel closer to home as a movie that revolved around two certain characters who experienced the body-switching effect when a meditation experiment went wrong.

1. Rock On (performed by Michael Damian)

(Rock On) was a 1973 original by David Essex that was covered by Michael Damian in 1989, topping the US Billboard Hot 100 after his version was released. The music video featuring the actors involved in Dream a Little Dream played an instrumental role in the song’s popularity, both for Michael Damian and even for David Essex.