There is one reason why people remember the Monday Night Football game from December 8, 1980, and it’s not because the Dolphins beat the Patriots in overtime. This game resides in infamy due to a late newsflash interruption. With three seconds left in regulation, legendary sportscaster Howard Cosell steadied his breath and prepared his immense audience with these words, “Remember, this is just a football game. No matter who wins or loses”. He then proceeded to shock the world: “An unspeakable tragedy confirmed to us by ABC News in New York City. John Lennon, outside of his apartment building on the West Side of New York City, the most famous, perhaps of all of the Beatles, shot twice in the back, rushed to Roosevelt Hospital, dead on arrival”.

John Lennon was 40 years old when he was killed 41 years ago. He was murdered by an obsessive fan named Mark David Chapman on a New York City sidewalk in front of his wife Yoko Ono. In the four decades since his death, his music, words and works as an activist continue to comfort, reassure, and inspire. He was a casualty of his celebrity, but John Lennon cannot be amalgamated as another rock star tragedy. He was targeted because of his unbelievable talents and attributes as a human being; the same talents and attributes that gave joy to so many.

The legend of John Lennon is sentient sentiment. It will continuously flourish because good music never goes out of style and his music was better than most. Still, it is hard to believe John has been gone for over forty years. Though this was an American assassination of an English rockstar, it was a worldwide tragedy. These are the reactions to the murder of John Lennon by those who broke the news and who knew him best.

“It’s very difficult for me, and I occasionally will have thoughts and sort of say, ‘I don’t know, why don’t I just break down crying every day?’ Because it’s that bad…There will be times that I just have memories and just think, ‘Oh my God, it was just so senseless’…I rerun the scenario in my head. Very emotional. So much so that I can’t really think about it. It kind of implodes. What can you think about that besides anger, sorrow? Like any bereavement, the only way out is to remember how good it was with John. Because I can’t get over the senseless act. I can’t think about it. I’m sure it’s some form of denial. But denial is the only way that I can deal with it.”

“When John went, I was in the Bahamas. I was getting a phone call from my step kids in L.A. saying, ‘Something’s happened to John’. And then they called and said, ‘John’s dead’. And I didn’t know what to do…I still well up that some bastard shot him. But I just said, ‘We’ve got to get a plane.’ We got a plane to New York, and you don’t know what you can do. We went to the apartment. ‘Anything we can do?’ And Yoko just said, ‘Well, you just play with Sean. Keep Sean busy.’ And that’s what we did. That’s what you think: ‘What do you do now?’”

“The day John died, I felt my youth had been put in a box and that box was closed. The generational attachment was that profound. If you look on YouTube, you’ll find the NBC special on John Lennon I anchored that week. Professional Jane was really trying to hold it together, but the girl inside me was losing it. I remember on the Today show the morning after John died, Tom Brokaw and I ended with an extended montage under the song “Imagine.” The second we wrapped, I started sobbing. An AP photographer captured the moment — me with my head in my hands, Tom looking like he didn’t know what to do when a woman is crying.”

“I was John and Yoko’s personal assistant for a few years in the early 1970s, and we had a relationship when he and Yoko separated in 1973 for a couple years…I was out with friends on December 8, 1980, and when I got back to my apartment, the phones were ringing. People were telling me the news. Ringo’s executive assistant, Joan, had heard about the shooting and rang me from England. She hoped John might still be alive. I said, “Hey, it’s over.” I got off and called David Bowie’s assistant. I said, “Coco, you better tell David.” She said, “David’s out on a date. You shouldn’t be alone. Come down here.” I got there and David came in and the three of us stayed up all night, watching the news and crying, and saying, “I just don’t understand. How could somebody do something like this?”

“I was next-door neighbors with John at the Dakota. I heard music through the walls. We were friends. Yoko and I are lifelong friends, and Sean is like a godson to me. But long before all that, John was simply an inspiration…If John were here today, he’d be writing songs about making the world a better place, because that was his goal. He’d be collaborating and encouraging creative expression. He’d be a passionate husband and loving father, and he and I would still be caring friends.”

“I had the unfortunate legacy of hosting Saturday Night Live that week. John died on a Monday night and the next morning, going into 30 Rock to prepare for Saturday’s show, the offices were silent. Normally it’s raucous with people playing music and laughing. The only sound I remember were sobs from behind closed doors. We talked about canceling and probably should have. The show had no energy…You could say I was a Paul girl. Then probably George, then Ringo, then John. I wasn’t a rule breaker. And I was only 21. I barely had any life experience. Now I’m 62 and I understand it completely. John was the hero of a generation. He was a husband, a father to a little boy. We all lost something when we lost him, and the tears are coming now as I think about it.”

“In the ‘70s John was such a towering figure that it was almost like hanging out with a god. I was a lowly magazine publisher. He was a Beatle. When you’d spend time with him, you had to be on top of your game and quick-witted. He was so sharp, so smart, so funny. His energy could be scary. After an evening with him, I’d walk away and think, My God, did that just happen?”

“I heard about his death on the news. The feeling went from sad to horrifying to tragic. I cried a lot. The next morning, I came into the Rolling Stone office late and closed my door. People knew I was upset…He combined all the elements of a superman for people my age: humor, wisdom, ambition, strength, talent. And he was a great rock ‘n’ roller. We were doing a photo shoot with John and Yoko that whole week [leading up to his death] for the release of Double Fantasy. Annie Leibovitz was in their apartment that day when she took that powerful, iconic image of John wrapped around Yoko. I think it was John’s idea to do that, and it was so representative of their relationship, of birth, of life, of death.”

“I lived between 73rd and 74th on Central Park West, and the Dakota was the next building down. The day before John was murdered, I stood right in front of the Dakota and a guy attached himself to me in a manic and alarming way. He just started talking a mile a minute at me. Eventually I just sort of scraped him off. I got out of the conversation as soon as possible and made it past my doorman into the safety of my building. But in fact, that was Mark David Chapman, the guy who killed John.”

“The next night, I’m talking on the phone, sitting in a window that looks out onto the back of the Dakota, when I heard five shots. The shots just reverberated through that courtyard. Booming shots, like from a large caliber weapon, like a .38. I thought to myself, “That’s a police shooting right there.” I told my friend on the phone, “You think things are crazy in Los Angeles, I just heard the cops shoot somebody down on the street.” We signed off, said goodbye. Twenty minutes later she called me back and said, “That wasn’t a police shooting, James. That was John Lennon.”

“I’d taken a series of pictures in the studio with John and Yoko that final weekend. I left the studio early Saturday morning. The sun was coming up. That Monday I was in the darkroom hoping to get to show him the photos before my 2 a.m. deadline at the Village Voice. My doorman rang my buzzer and asked if I was listening to the radio. Then my friend Toby called from California. I had all kinds of thoughts when I heard the news. The finality of it was devastating. I’m someone who likes to fix things, but this was something nobody could fix.”

“John was so proud to live in New York. People recognized him but he could still go out, ride taxis, visit friends. We were doing a shoot one day and I gave him a shirt that said NYC on it. The picture became iconic, I think, because it shows how readily available and open he was. That’s how I remember John.” 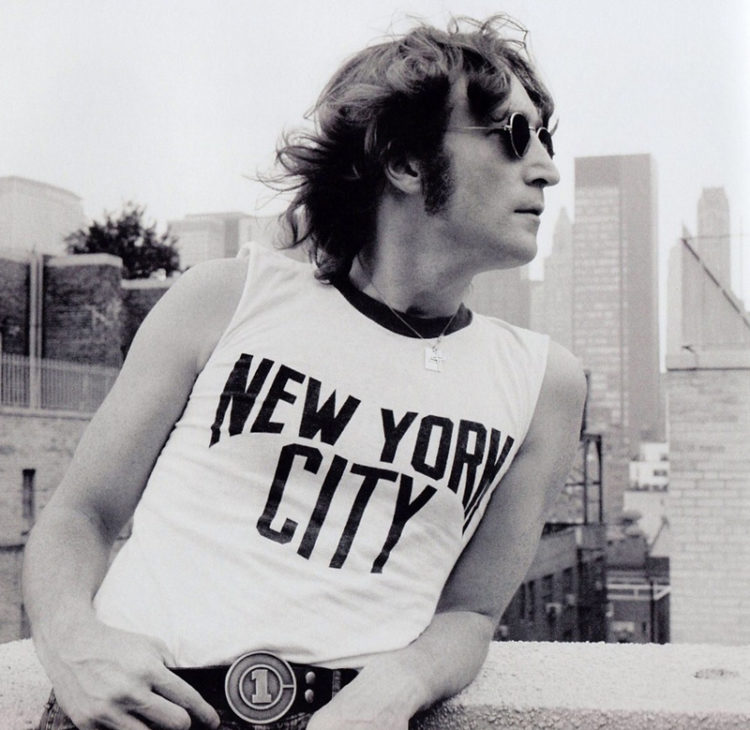