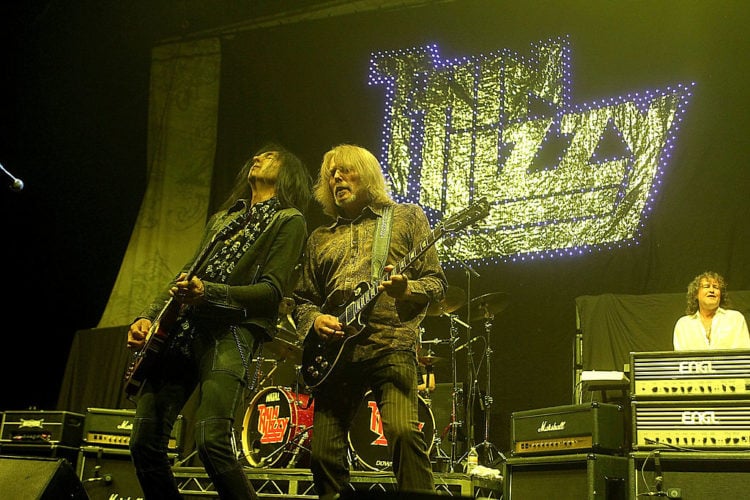 These days, you’re lucky to get a new album from your favorite band once every 3 or 4 years. Back in the 1970s, things were different. Bands regularly released 1, sometimes 2, new albums every year… and not just filler albums either. These were good, often great, albums that could happily hold their own with the best albums of today. But even by the standards of the ’70s, Thin Lizzy were prolific. Over a career tragically cut short by the death of frontman Phil Lynott, they released 12 studio albums and two career-defining double live albums, leaving us with an amazing body of work that, all these years later, still sounds as fresh and innovative as ever. Find out which of their albums rank as the greatest as we count down the 10 best Thin Lizzy albums of all time.

Thin Lizzy’s self-titled debut album wasn’t their finest moment. In 1971, Phil Lynott was full of ideas but hadn’t yet figured out the best way to channel them. But while it’s messier and less coherent than their later albums, it’s still a whole lot of fun. The band was young, enthusiastic, and completely fearless. They bounded from the folksy “Eire” to the hard-rocking “Look What the Wind Blew In” with a zeal and a passion that’s infectious. As ultimateclassicrock.com writes, it’s a helluva mess, but promising nonetheless.

Thin Lizzy never knowingly let a genre go untapped. On 1974’s “Nightlife,” they flirted unashamedly with soft rock. Unfortunately, soft rock didn’t feel quite the same about Thin Lizzy as Thin Lizzy felt about it. The result is, if not catastrophic, then a far cry from their finest work. Still, hard-rocking belters like “It’s Only Money” and “Sha-La-La” save it from disgrace.

1983’s Renegade wasn’t Thin Lizzy’s finest hour – personally, if not professionally. Their aging fanbase was discovering the joys of the Eagles, they were at war with their record label, and drugs and drinks were taking their toll. But they could still deliver a good tune when they wanted to, and they did, several times over. Thanks to standout tracks like the jazz-inflected “Fats” and the crunchy “Angel of Death,” “Renegade” was saved from becoming the disaster it could have been and turned into an underappreciated but still very fine album.

7. Vagabonds of the Western World

Thin Lizzy’s first two albums were full of promise but didn’t deliver the goods. In 1973, they finally stopped living on potential and started showing actual merit with “Vagabonds of the Western World.” Bolstered by the success of the previous years “Whiskey in the Jar,” Lynott honed in on his songwriting gift and delivered some of the finest tracks of his career, including the brawny “The Rocker” and the lusty “Mama Nature Said.” Their previous two albums had hinted at a great band; on “Vagabonds of the Western World,” we finally got to meet them.

By 1983, Thin Lizzy were a band at breaking point. The path of self-destruction Lynott had chosen was just a few years from reaching its tragic conclusion. The rest of the band’s members weren’t exactly doing great either. So, what does an aging, ailing band do when they can barely get it together enough to hold a mic? Introduce some fresh blood to the mix, of course. The addition of keyboardist Darren Wharton and guitarist John Sykes gave the band the shot in the arm they so badly needed. “Thunder and Lightning” is sublime, with enough moments of heavy, crunchy rock to remind you of the band’s beginnings (“Thunder and Lightning” and “Cold Sweat”) and enough of heartbreaking self-reflection (“Heart Attack” and “Bad Habits”) to indicate their ending.

As Loudersound.com writes, double live albums with gatefold sleeves had become something of a dino-rock standard by 1978. But if ever there was a band to revitalize a worn-out cliché, it was Thin Lizzy. On “Live And Dangerous,” they delivered a blistering live set that cemented their reputation as roguish Irish charmers with more wit, more banter, and more ingenuity than most of their counterparts combined.

Back in the ’60s, Lynott and guitarist Gary Moore were members of the prog group Skid Row. When the band dissolved, they went their separate ways, but were still happy enough to work together when the occasion called. After Lynott contributed his bass and vocal talents to Moore’s debut solo album, Moore returned the favor by stepping into Brian Robertson’s shoes on the 1979 album “Black Rose: A Rock Legend.” The result is epic, with Moore’s superb guitar work blending perfectly with the band’s funky rock.

1975’s “Fighting” features the classic lineup of Lynott, Brian Downey, Scott Gorham, and Brian Robertson. This was a band at the peak of its powers: they were still innovating and inspiring, but they’d managed to chop, chip, and hone their style into something coherent and focused. The result is an album crammed with funky little ditties like “Fighting My Way Back,” heavyweight belters like “Ballad of a Hard Man,” and soaring numbers like “King’s Vengeance.”

Thin Lizzy’s decision to hire producer Tony Visconti for 1977’s “Bad Reputation” paid off. Applying the same magical touch he’d previously shown working with the likes of David Bowie and T.Rex, Visconti helped pull a triumph out of the bag. Sweet in parts, severe in others, “Bad Reputation” doesn’t leave a single nook of Thin Lizzy’s formidable talents unexplored. From the huge hooks of “Dancing in the Moonlight” to the thunderous percussion of the title track, this was Thin Lizzy doing what Thin Lizzy did best.

Ranker.com rates “Jailbreak” as Thin Lizzy’s finest ever album. In fairness, so does everyone else. Having finally wrangled out their artistic vision on the previous year’s “‘Fighting,” 1976’s “Jailbreak” sees the band hit the perfect note. From the romantic charms of “Romeo and the Lonely Girl” to the timeless appeal of “The Boys Are Back in Town,” the album delivers one hit song after another. Displaying a degree of talent that’s almost frightening at times, “Jailbreak” doesn’t just represent Thin Lizzy’s finest moment, it represents one of the finest moments in the entire length and breadth of rock history.