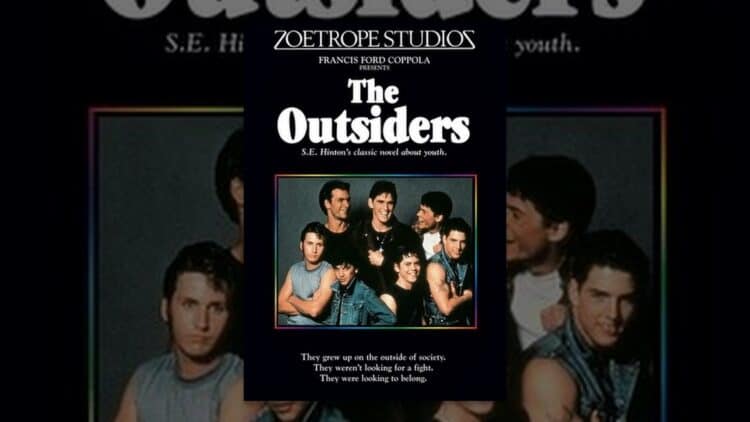 Talk about rising star power! “The Outsiders” featured so many young future big film stars that it was almost blinding. Not to mention the fact that it was directed by the future Godfather mega-director, Francis Ford Coppola. From Ralph Macchio to Tom Cruise, this film cornered the market on great young actors. In fact, it even had two amazing cameos by Johnny Depp and Coppola’s nephew, the great Nicolas Cage (real name-Nicholas Kim Coppola). So, the director may not have given his favorite nephew a role in the Godfather trilogy but he did give him a cameo in “The Outsiders”.

“The Outsiders” is about a teenage gang whose members lived in rural Oklahoma. According to Fandom, they were called “the Greasers” and they were constantly at odds with a rival group called “the Socials” (Socs) who were a gang of Richy-rich teens who lived on the south or west side of town and the Greasers described them with some disdain as having ‘cars, money, and futures’. Two of the Greasers, namely Johnny and Ponyboy ended up brawling with the Socs and one of their members is killed. That’s when the two boys have to go into hiding. Very soon Johnny, Ponyboy, Dallas, and all of the other Greasers, are forced to deal with the consequences of their violence. Some of them make an attempt at achieving redemption, however, several others end up meeting a tragic end. The film was released on March 25, 1983, in the US. It was adapted from the novel and was directed by Francis Ford Coppola with music by Carmine Coppola. It was distributed by American Zoetrope in conjunction with Netflix and Warner Bros. Pictures. It had a box office take of $33.7 million, which was actually pretty good money back in the 80s.

OK, enough raving about this great movie, let’s move on to the songs. OK, maybe they can’t rival the star-studded cast (no pun intended but definitely studs) according to Reddit, and the amazing throwback pic and according to Wiki, where Matt Dillon looks really hot half-naked but also an awful lot like Nicolas Cage. Oops! But, they were still pretty good. So, here they are, ranked from not so hot to really amazing:

10. Jack Daniels If You Please by David Allan Coe

This is a song from Coe’s album Human Emotions and was released by Columbia Records in 1978. It plays in the movie during the scene where Dally is escorting Johnny and Ponyboy out of Buck’s party.

Texas-born R. C. Bannon, whose real name is Daniel Shipley, is an American country music singer who was born in 1945 and has been musically active since 1977. He has recorded for both the RCA and Columbia record labels and was once married to Louise Mandrell with whom he performed a number of country music duets. This song is played during the scene where Johnny and Ponyboy ask Dally for help because they’ve killed Bob.

8. Out of Limits by the Marketts

The Marketts were a group that got their start in Hollywood back in January 1961. This song from the movie was actually the one they’re best known for and it became a million-seller. It plays in the movie during the scene where Ponyboy is getting drowned in a fountain.

7. Lend Me Your Comb by Carl Perkins

Who could ever forget the great Carl Perkins? He was undoubtedly the most influential rockabilly pioneer with great tunes like “Blue Suede Shoes” (before Elvis made it famous). According to Wikipedia, Carl’s recording of the iconic Elvis song was released in 1956. However, once Elvis purchased the song for $75k and his smash hit rendition hit the charts, Perkins became known a lot more for his amazing songwriting than for even his best performances. “Lend Me Your Comb” was fittingly played during Johnny cutting and dying Ponyboy’s hair.

This song was written by Van Morrison and his band “Them” performed on it. Gloria was originally recorded for their 1964 album entitled “Please don’t go”. It’s played in the movie during the scene where Johnny and Ponyboy go to meet up with Dallas and go to the movies. It’s one of those songs that gets stuck in your head and you can’t get it out. It was also used in one of my fave films, “Flashdance”, during the ice skating rink scene.

Although many have tried, nobody could ever sing like the King and this is yet another great Elvis song that proves just that. It plays during the scene where Johnny and Ponyboy are sneaking onto a train headed for Windrixville.

Another Elvis classic. This one plays during the scene where Ponyboy and Johnny are arriving at the church and then going inside.

3. When It Rains, It Really Pours by Elvis Presley

I’m sure you’re seeing a pattern now but “The Outsiders” has more great Elvis songs than an actual Elvis movie. This one plays during the scene where Ponyboy and Two-Bit are walking to the Tastee Freez.

2. Tomorrow Is a Long Time by Elvis Presley

Another great Elvis song. Yes, I did rank all of his songs high on the list because I just love me some Elvis and always will. This fantastic example of how great the King really was played during a scene from the movie with Darry’s parents, Soda, Ponyboy, and a train wreck.

Another unforgettable song by the King that you really have to hear to appreciate. It has a haunting melody and, of course, those dulcet Elvis tones. It’s the perfect song for playing during the scene in the movie when Ponyboy, Two-Bit, and Johnny are walking to the lot.