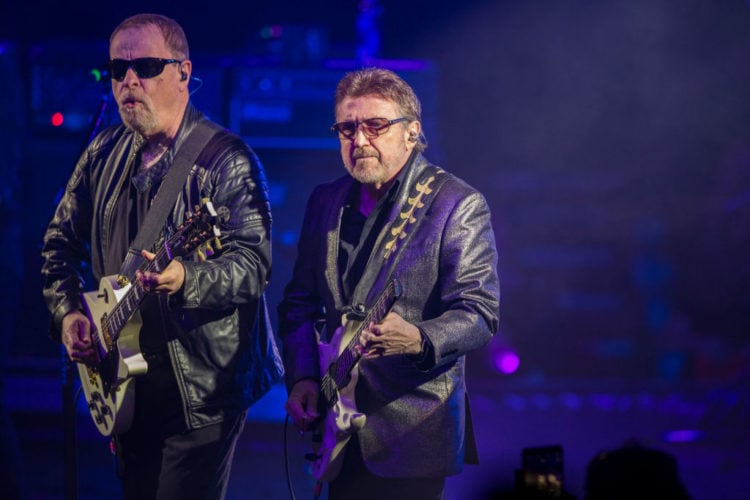 Blue Oyster Cult is an American rock band, and one of the most influential rock groups of all time. Most notable for songs “The Reaper,” “Burnin’ For You,” and “Godzilla.” They are also known for being one of the first bands to use a synthesizer on stage. Formed in 1967, they released their debut album “Blue Oyster Cult” a few years later in 1972. Though not as successful as later albums, it would be followed by “Tyranny And Mutation,” and one of their most acclaimed albums “Secret Treaties.” The band have gone through many lineup changes which have also affected their popularity and touring availability. In this article, we’ll rank the best 10 Blue Oyster Cult albums from their extensive catalog.

Cultosaurus Erectus is the seventh release by Blue Oyster Cult. When released in 1980, it received mixed reviews and comparatively low sales. However, in recent years it has come into light as one of their best albums and is now considered a classic. Musically the album is more classic punk rock than metal which was gradually becoming their forte.

Mirrors is the sixth studio album by Blue Oyster Cult that was released in 1979. The album is notable for two things, the first being that this is the first time a guitar synthesizer was used by them. The second is that it’s the first album the band worked with producer Tom Weman on. Unfortunately this fit was not met with immediate acclaim, which is why Mirrors is low on this list. The singles do redeem themselves, and years after it was released it did gain some more notoriety, despite its charting shortcomings.

Imaginos is the twelfth studio album by Blue Oyster Cult. It originally started as a solo album for drummer Albert Bouchard, but the band later revived the recordings and pieced it together as a more conceptual album. After Bouchard left, it was brought into fruition by Sandy Pearlman, and features mostly themes of sci fi related intrigue. The concept fell flat with audiences, but the songs do hold up to this day.

Club Ninja is the tenth studio album by Blue Oyster Cult. Released in 1985, this album saw the return of Sandy Pearlman, but this time as a producer. The band also brought back Alan Averill in writing and mixing duties. It’s an experimental album that will push boundaries and is sometimes met with negative criticism from fans, but the album has become a fan favorite because of its oddities and experimentation. Unfortunately, this album also didn’t quite hit the mark in terms of sales goals, but it added to their fan favorites list of live songs.

The Revolution By Night is the ninth studio album by Blue Oyster Cult. The album was released in 1983, and went on to become their best charting album since 1980. The band worked with multiple producers including their new producer, Bruce Fairbairn, on this release. This was also the first time BOC had worked with Mick Jones of Foreigner fame, who would go on to help produce and write two more albums for BOC.

The Symbol Remains is the first studio album by Blue Oyster Cult in nineteen years! It’s also their first studio album on Frontiers Records. The release was given a more classic rock feel than previous releases and was aimed to please both younger fans and old fans. It was well received by critics, but not so much by long time fans who were used to their more progressive sound. Still, it’s an excellent addition to any rock music collection. It gave older fans something to enjoy during the pandemic, and gives many nods to The Revolution By Night, as the album’s name comes from a lyric on that 1983 record. “The Alchemist” was quick to be come an absolute fan favorite.

Fire Of Unknown Origin is the eighth studio album by Blue Oyster Cult. It’s was released in 1981, and holds the distinction of being their most commercially successful record. The band made a return to the more hard rock sounds that they first started with on Tyranny And Mutation, but added more vocals and a poppy sound to appeal to new fans. The album does have a lot of flops, but it’s also full of iconic songs like “Burnin’ For You”, “Veteran Of The Psychic Wars”, and “Sole Survivor”.

Tyranny And Mutation is the second studio album by Blue Oyster Cult. The album was released in 1973, and featured the single “Hot Rails To Hell”, which didn’t chart. Despite the lack of chart success, this album was adored by fans and quickly helped launch them to stardom. While the first week’s sales were nothing to write home about, the following world tours they went on playing the songs off this record would cement them in rock and roll stardom.

Secret Treaties is the third studio album by Blue Oyster Cult. The album was released in 1974, following its predecessor’s success, and became an instant classic. This record had two difficult acts to follow, but it was also met

Agents Of Fortune is the fourth studio album by Blue Oyster Cult. Released in 1976, this album was the first classic rock album that would be released by Blue Oyster Cult. This is the group’s definitive classic rock record due to its sound and influence. This album contains their most famous track “The Reaper”, which went on to live a life of its own after it became famous for the cowbell sketch on Saturday Night Live.