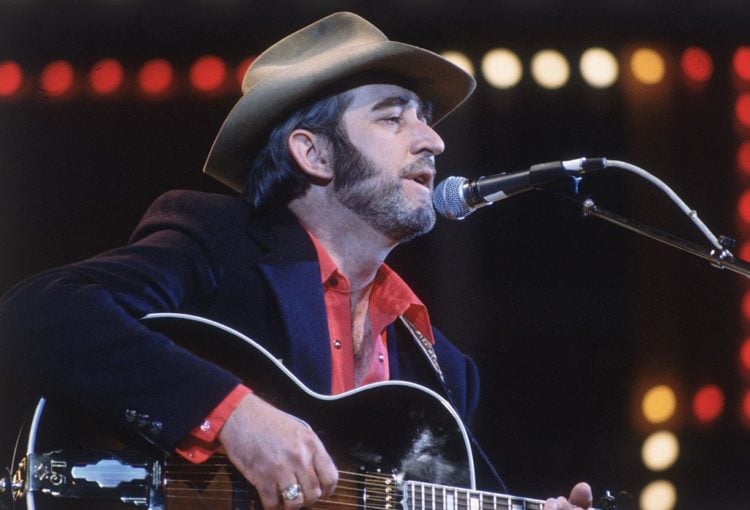 Don Williams was always more than just another country artist. He was a legend, connecting with audiences in a way few of his peers could dream of and resonating with each new generation in turn. Between 1973 and 1991, every single one of his singles except one cracked the Top 20 on the country charts. When he died in 2017, he left behind a legacy of work that’s the envy of many and the delight of all. Here, we take a look at his outstanding contribution to country music with our pick of the 10 best Don Williams songs of all time.

When Don Williams teamed up with songwriter Wayland Holyfield, you could smell the hit before the ink had even dried on the page. Case in point, Some Broken Hearts Never Mend. Released in January 1977 as the lead single from Williams’ sixth album, Visions, it peaked at number one on the country chart, becoming his sixth single to do so. A few years later, Telly Savalas topped the Swiss charts with his rendition, and in the 1990s, the Bellamy Brothers earned a hit with their reggae version.

9. Another Place, Another Time

Williams may have reached the peak of his popularity in the 70s, but the hits never stopped drying up. In 1988, he proved age was no barrier to success with Another Place, Another Time, a tender ballad about finding the right person at the wrong time. Co-written by country legend Bob McDill and Paul Harrison, the song hit No. 5 on the Billboard Hot Country Singles & Tracks chart.

Williams never much cared for collaborations, but when Emmylou Harris invites you to duet, you do it. Williams’ creamy baritone and Harris’ gentle folk-tinged vocals blend together perfectly on this moving ballad by Townes Van Zandt, creating one of the most blissfully romantic songs in either singer’s catalog. Released as the first single from Harris’ album Cimarron in September 1981, it topped the country charts in Canada and scored the pair a No. 3 hit on the US Billboard Hot Country Singles chart.

As Rolling Stone says, one of the key reasons for Williams’ success with country audiences, and one of the main reasons he never achieved greater crossover success, was that while he might have had affinities with the pop-country songs dominating the charts at the time, he was never anything other than his own man. He was a crooner, and he never tried to be anything else. Given that his unwillingness to bend provided us with classic tracks like the Roger Cook and John Prine co-write Love Is On A Roll, we’d say that was a very good thing indeed.

One year after his commercial breakthrough, Williams returned with You’re My Best Friend. The entire album is a delight, but its titular track is something special. The first song of many with Wayland Holyfield, it combines a plaintive story about marital woes with a luscious, deeply soothing string arrangement. It topped the charts in the US and Canada and even managed to crack into the UK Top 40 – always a difficult market for country artists, but one Williams conquered with ease.

Decades before the Bro Country movement made country music a hit with guys, Williams was storming the charts with Rake and Ramblin’ Man. A song that was unapologetically made with the male demographic in mind, it describes the moment a man finds out that fatherhood is on the horizon. Delivered with wry humor and a healthy dollop of empathy, it was a smash, earning Williams a Top 3 hit on the Billboard Hot Country Singles & Tracks on its release in July 1978.

4. Lay Down Beside Me

Named as one of the best Don Williams songs of all time by tuko.co.ke, Lay Down Beside Me was, like many of Williams’ early recordings, composed by Williams himself. Before he had a chance to release it himself, Kenny Rodgers cut a version for his 1976 self-titled album. It took Williams to turn it into a Top 5 hit though, which he did in style in 1979.

No list of the best Don Williams songs of all time is compete without reference to I Believe In You, the biggest hit of his career and one of his most endearingly popular tunes. A gently political song written by Roger Cook and Sam Hogin, it tackles everything from growing old to religious fundamentalism, concluding with Williams shaking his head at the silliness of modern life and declaring “I believe in love…I believe in you.” Released in August 1980 as the first single of the platinum-certified album of the same name, it topped the country charts and took Williams to No. 24 on the Hot 100 – his highest-ever position on the pop charts.

As Billboard says, Tulsa Time definitely had a different sound than we were used to from Williams. A gritty, funky piece of rock and roll, this hard-luck tale about trying and failing to make it big in the city rocked harder and faster than anything Williams had done before. Released in October 1978, it became his eighth country chart-topper, later earning him both the ACM Song of the Year title and the CMA award for Male Vocalist.

Good Old Boys Like Me isn’t just the best Don Williams song, it’s one of the greatest country songs of all time, period. A sweetly nostalgic composition from Bob McDill, it gives a magical insight into a Southern way of life that’s fast disappearing. Released in March 1980 as the second single from Portrait, it peaked at No. 2 on the Billboard Hot Country Singles & Tracks chart. Since then, numerous other artists have tried to better the original. Suffice to say, none have succeeded.