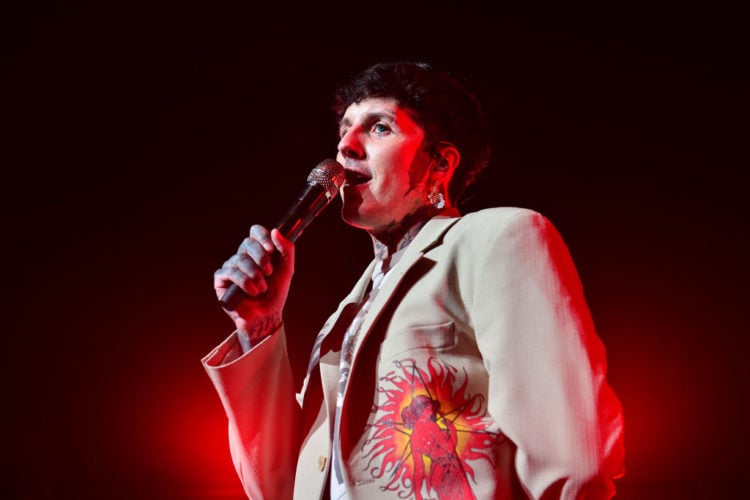 Not too long ago, Bring Me the Horizon were just a bunch of lads from Sheffield scraping together a living playing deathcore at the city’s metal clubs. Now, they’re one of the biggest British bands in the world. Collectively, vocalist Oli Sykes, guitarist Lee Malia, bassist Matt Kean, drummer Matt Nicholls, and keyboardist Jordan Fish have released six studio albums, sold 4 million records worldwide, and amassed over 1 billion music video views on YouTube. Whether you like their music or not, it’s impossible to deny just how huge they’ve become. Find out more about their frontman and lead vocalist as we reveal 10 things you didn’t know about Oli Sykes.

1. He’s got his own clothing line

Sykes is nothing if not versatile. As well as being the lead singer of one of Britain’s biggest bands, he’s the founder and owner of his own fashion line. Since he launched Drop Dead Clothing at the age of 21, it’s developed into one of the most popular alternative clothing brands in the world, with a global customer base and a flagship store in London. His mother, Carol, runs the store.

Sykes has eschewed meat ever since he watched a documentary about factory farming at the age of 16. As well as becoming a ‘face’ for PETA, he’s designed a charity t-shirt to raise funds for animal rights campaigns via his Drop Dead clothing line. In 2013, he took his vegetarianism one step further by becoming a vegan. His commitment to his new lifestyle has even seen him open a fully-vegan arcade bar named Church in his hometown of Sheffield.

It’s not often you meet a vampire vegan, but that’s exactly what Sykes is these days… kind of. As loudwire.com writes, the star and his wife recently underwent a dental procedure that left the couple with two pointed canine teeth. Writing via Instagram, Sykes confirmed “So I’m kinda a vampire now…”, while wife Alissa Salls added, “Bitten by a shadow bonded by bloodbaths and it forever feels like yesterday.”

He might only be 34 years old, but Sykes already has two marriages under his belt. The first time he said “I do” was in July 2015, when he married model and tattoo artist Hannah Pixie Snowdon in Tuscany, Italy. The marriage fell apart almost before it had begun: by 2016, they’d separated, with Sykes citing infidelity on Snowdon’s part for the break-up and Sykes claiming abuse on his. Since 2017, he’s been married to Brazilian model Alissa Salls.

5. He’s got a history of addiction

In 2014, Sykes publically admitted to his drug addiction for the first time. He made the announcement as part of his acceptance speech at the inaugural AP Music Awards, where the band picked up awards for Best International Band and Best Album. After revealing he’d been addicted to ketamine, he confirmed he was now clean and sober after spending a month in rehab. The experience went on to inspire the band’s critically acclaimed fourth studio album, Sempiternal.

6. The first album he ever bought was by Meatloaf

Meatloaf doesn’t seem a likely influence on Bring Me the Horizon, but his 1993 album Meat Loaf – Bat Out Of Hell II: Back Into Hell was the first record Sykes ever bought…. although, as he revealed to loudersound.com, his reason for buying the album had less to do with the music and more to do with his crush on Dana Patrick in the video for I’d Do Anything For Love. Other bands and artists to have inspired Sykes include Black Flag, Every Time I Die, Poison the Well, Misfits, Pantera, and The Dillinger Escape Plan.

Sykes began creating music at school under the name Quakebeat. Around the same time, he started playing in the hip-hop band Womb 2 Da Tomb alongside his brother Tom and future Bring Me the Horizon bandmate Matt Nicholls. By 2004, he was ready to get serious. After recruiting a few new members, he and Nicholls formed Bring Me the Horizon. The debut outing, 2006’s Count Your Blessings, was widely panned, but each new release has bought increased commercial and critical success. They’ve now released six studio albums, two EPs, and two live albums. For their efforts, they’ve won seven Kerrang! awards, three Alternative Press awards, two Grammy Award nominations, and been cited as an influence on everyone from Architects to The Devil Wears Prada.

8. He suffers from sleep paralysis

Sykes has experienced sleep paralysis (a sleeping condition that prevents the sufferer from moving or speaking as they fall asleep or wake up) since he was 12 years old. According to Pop Slider, the frontman helps control the condition through daily mediation.

Sykes has already collaborated with everyone from A Day to Remember to DJ Skrillex and Linkin Park, but there’s one band he still hasn’t crossed of his wish list – Arctic Monkeys. Strangely enough, he and Arctic Monkeys frontman Alex Turner attended the same school in Sheffield, but as Turner was in the class above Sykes, their paths never crossed. “I would love to do something with them, collaborate somehow. Because it is just a sick thing that we both went to the same school and both did well,” he’s said. “They’ve been an inspiration to my band, we watched how they did stuff and we took a lot of notes. So it would be super cool to do something with them at some point.”

10. Monks helped him get through lockdown

Sykes spend the entire pandemic with his wife in Brazil. Speaking to The Sun, he revealed how he began spiraling into a “very dark” place, but was saved from the brink after the monks from a local ashram invited him to stay with them for a month. “These people are just the happiest people in the world,” he shared. “You go and meet them and they’re the most positive and spiritual people, and I just thought, I want a piece of that. I want to see what it’s like.”

The History and Evolution of Rocklahoma

The History and Evolution of Psycho Las Vegas

The 10 Best Adele Songs of All-Time

The 10 Best Every Time I Die Songs of All-Time

10 Things You Didn’t Know about ZillaKami