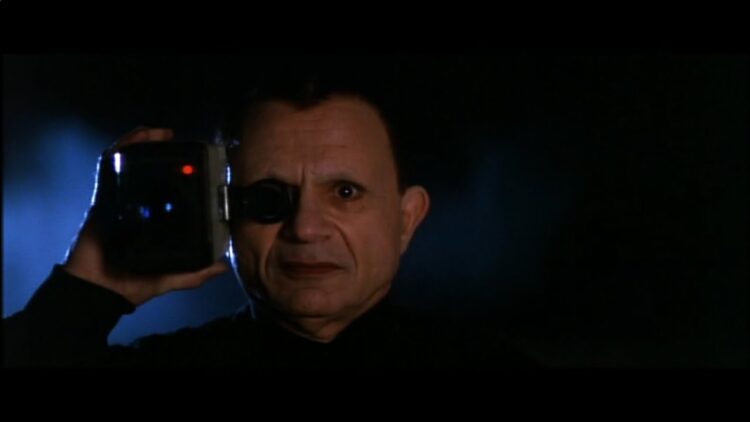 David Lynch directed and co-wrote the 1997 release, Lost Highway. The movie has an all-star cast and a great plot which is moved along by a selection of amazing songs. Lynch himself had a role in some of the singers that appeared on the soundtrack. However, it was Trent Reznor who was the driving force behind the soundtrack. This is a ranking of all the songs from The Lost Highway Soundtrack.

One of the things Badalemnti captures in this song is an air of foreboding. When listening to the plaintive strings you feel sure that something is going to happen or there is going to be something terrifying right around the corner.

When looking at the title of this song, you may expect something more than hearts and flowers. However, much like other parts of Badalamenti’s score, it feels darker and foreboding. The song features a heavier dose of percussion in the background.

According to IMDB, there was never a choice of who was going to play Mr. Eddy. Robert Loggia wanted to play the part of Frank Booth in Blue Velvet but it went to Dennis Hopper.

There is a distinct film-noir overtone in this song. Even if you haven’t seen the movie, it feels like a spooky late-night drive song. Unlike other songs from Badalamenti’s Lost Highway score, there is little to no emphasis on strings. Instead, he brings a variety of percussion instruments to the forefront.

The basis for this song was an air show catastrophe that happened at Ramstein Airforce Base near Frankfurt Germany. The lyrics tell the horrific tale and the impact it had.

The movie starts with this Bowie song. Between this song, and that it’s a David Lynch movie, moviegoers have an idea the film will have you captivated. The interesting thing to note is Lynch once said the film is based on something that happened in his real life.

The song starts with the chords from an electronic piano. It sounds like something you might hear in an after-hours blues club. The song has a much different feel than other Badalamenti additions on this soundtrack. When listening to it, you feel you are transported to the streets of Paris.

Before the song was known by this title it was called Kinski. The song plays off part of the song Klaus Kinski by the Magdalene Keibel Combo. Like many of the group’s other songs, this one didn’t have a chorus until Rammstein started production on the album.

Mr. Eddy is the mafia boss who plays a prominent part in the movie. The song opens with some dialogue from the movie and screaming tires. It sets the mood for the rest of the notes which sound like a mob caper in instrumentation.

The song is amazing with many dark overtones. But, considering how much Fred’s entire universe has been overturned there is a bit of unexpected sweetness in the song you might not expect. Through the piece, it stays consistent and haunting.

This is a jazz standard written and recorded by Jobim. One of the things that makes this song work so well in the movie is that it is unexpected. Lynch’s film is avant-garde, to say the least, so adding something more standard throws the movie a little further off-kilter.

Adamson was a solid choice for one of the main score composers. His early work as a filmmaker gives him unique insight into constructing a soundtrack. With this selection, he effortlessly captures the style and the scene in the movie

This song was done by the group explicitly for the Lost Highway Soundtrack. Manson wrote the song after Lynch requested thy so something for the soundtrack. Even though a video was made for I, it wasn’t released until 2009 because part of the video had questionable scenes.

Like Apple of Sodom, this song was done for the movies. Much of Smashing Pumpkin’s work between the albums Adore and Mellon Collie and the Infinite Sadness was work on film soundtracks. Eye was the first song done with the group’s long-term drummer Jimmy Chamberlain.

4. I Put A Spell On You – Marilyn Manson

This song was initially on the group’s album Smells Like Children. It’s a cover of a song initially performed by Screamin’ Jay Hawkins in 1956.

The Drifters version of this song was quintessential ’50s. Reed’s version opens with more of a Rockabilly beat that segues into a touch of electronica. The way the singer does the song is completely different from the initial version but it is the right amount of update for the film.

Many Trent Reznor songs were never credited to the singer and instead went under his group Nine Inch Nails. The singer said that it has his name because the band was in an upheaval and members had left. The song plays near the end of the movie before a reprise of David Bowie’s song I’m Deranged.

The title of this NIN song refers to Abinsthe which is how the green fairy is known. The tune was written for the Lynch film The Lost Highway. It was well-received but the lead singer of the group felt like it wasn’t his best work. The song was performed live for the first time at Red Rocks Amphitheatre in Morrison Colorado.