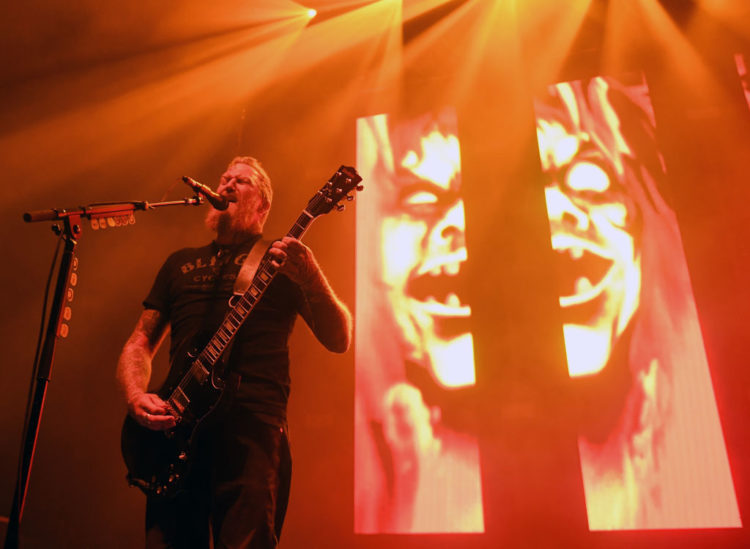 Not many bands manage to successfully combine Southern rock with sludge, but not many bands are quite so idiosyncratic as Mastodon. Formed in 2000 by the insanely talented Bill Kelliher, Brent Hinds, Troy Sanders, and Brann Dailor, Mastodon have spent the past two decades redefining heavy metal with their forward-thinking sound. No two albums sound the same, but they’re all grounded in the kind of songs that worm their way into your brain and stay there. Here, we look at the 10 best Mastodon songs of all time.

Kicking off our countdown of the 10 best Mastodon songs of all time is “Trainwreck.” There are better songs on the band’s debut album, but given the strength of “Remission,” that’s to be expected. Regardless, it’s a blistering centerpiece that builds from a delicate intro with a slant towards progressive rock into an aggressive, riff-driven piece of ecstasy.

The second single from the band’s seventh studio album “Emperor of Sand” is “Steambreather,” a song Spin describes as an “intricate metal mini-symphony.” As descriptions go, it’s bang on the money. Brann Dailor’s soaring vocals hold the whole thing together in what might well be one of his best performances to date. Released in October 2017, it peaked at No.18 on the Billboard US Mainstream Rock Songs chart.

“Mother Puncher” is early Mastodon at their best. There are riffs, riffs, and more riffs, with Bran Dailor’s animalistic drum patterns driving the whole thing forward at breakneck speed. Concise, tight, and dripping with aggression, it’s one of the standout tracks of the 2002 album “Remission.” According to Louder Sound, the title is one of the few lasting contributions made by short-lived former vocalist Eric Saner, who joked the song’s aggressive thrusts were enough to make him want to punch his dear old mom.

“Colony of Birchmen” would still be an outstanding song even if Queens of the Stone Age’s Josh Homme hadn’t jumped on board as a backing singer. As it is, the way his smokey vocals drift over the captivating riffs takes it next level. It’s a song with an angel on one shoulder and the devil on the other, somehow managing to sound both beautiful and threatening at the same time. Few bands are able to pair eloquence with aggression: Mastodon can, and here, they prove it. Released in 2006, it was the first Mastodon single to reach the Hot Mainstream Rock Tracks chart, where it peaked at No.33.

“The Czar” isn’t a standard 3-minute chart song. It isn’t a standard anything, actually. A complex, conceptual interpretation of ‘The Mad Monk’ Rasputin’s attempt to usurp Tsar Nicolas II and his later assassination, this 4 part mini symphony manages to take in Russian history, time, space, and astral planes. If that wasn’t enough, it also references Brann Dailor’s (thankfully aborted) attempt to dig his way into his sister Skye’s fresh grave while he was high on LSD and grief. It’s deeply weird, utterly disturbing, and absolutely magnificent.

“Emperor of the Sun” wasn’t a perfect album, but it still has enough emotional heft to make it arresting. “Roots Remain” is a multilayered, sophisticated effort that manages to be both deeply personal and universal at once. Rock Sound once said of Mastodon that “Few bands out there twist metal into such bewildering, bewitching shapes.” Here, they twist, bend, and shape it into something that’s both timeless and like nothing you’ve ever heard before. And then, of course, there’s Brent Hind’s solo, which is hot enough to melt just about anything in listening distance.

After the success of “Remission,” Mastodon had their work cut out for them on their second album. Would they replicate the success of their debut? Or would they reveal themselves as flash-in-the-pan, one-hit wonders? As it turned out, “Leviathan” didn’t just match the success of its predecessor, it bettered it. A concert album built around the 1851 novel “Moby-Dick” by Herman Melville, it was voted Album of the Year by no less than three titles – Revolver, Kerrang!, and Terrorizer. In 2009, it was voted the best metal album of the 21st century by MetalSucks. “Blood and Thunder” can’t take all the credit for that, but its insistent riffs and infectious choruses deserve a round of applause anyway.

Named as one of the best Mastodon Songs by Enuffa, “Oblivion” was the first of the band’s songs to showcase the vocals of Brann Dailor, Troy Saunders and Brent Hinds together. Richly textured, executed flawlessly, and underpinned by some mind-blowing drum patterns from Dailor, it’s sensational.

“Leviathan” is an outstanding album, but if there’s one track above all of the rest that deserves a special mention, it’s “Heart Alive.” An ambitious 13-minute prog-metal epic, it’s a masterclass in timing, structure, and content. Its power is undeniable, with each band member stepping up to the plate and delivering a staggering performance. Released in 2004, it set the template for what the future of metal would sound like. And it sounded incredible.

1. March Of The Fire Ants

Mastodon’s debut album was sensational. It heralded the arrival of a band that had the complexity of prog rockers, the technical prowess of jazz musicians, and the commercial appeal of Sabbath. It had flavor and it had bite and on its second track, “March of the Fire Ants,” it had world domination written all over it. From the first face-melting riff to the last, it’s majestic, with Troy Sanders delivering the performance of a lifetime and Brann Dailor doing something godlike on the drums. It made metal fresh. It made it relevant. And it made every nu-metal band run for the hills in fear. Almost 20 years later, it’s still as epic as ever.