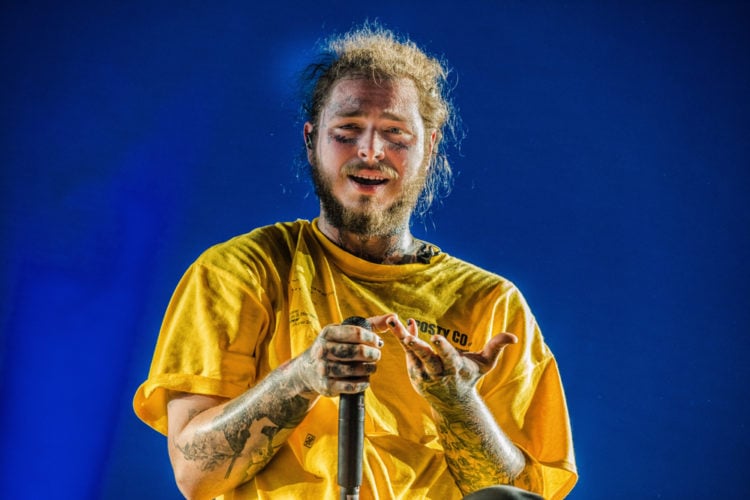 After the release of his debut single, “White Iverson” in 2015, Post Malone attained widespread recognition for his introspective songwriting that has resulted in numerous perfectly crafted anthems that we have listened to over the past five years. Popularly referred to as the pop’s “King of Heartbreak” , Post Malone has become one of the highest selling artist of our generation with over 80 million records sold worldwide. His hit single, “Congratulations” stayed on the US Billboard Top R&B/Hip-Hop Albums thereby setting the record for most consecutive weeks on the chart. So far, Post Malone has released three albums and has headlined numerous tours including the Runaway Tour and the SToney Tour of 2017. He has also received numerous prestigious awards including the American Music Awards, Billboard Music Awards, as well as several Grammy Awards nominations. Here are the ten best Post Malone tracks.

“Rockstar” was one of the most popular songs in 2017. The song is the lead single from Post Malone’s 2018 album, Beerbongs and Bentlys. The song features 21 Savage who complements Post Malone’s verses excellently with his deep voice. The song peaked at top position on the US Billboard Hot 100 as well as music charts for several other countries, including Australia, Canada, and New Zealand. The track was also nominated at the 61st Annual Grammy Awards for Record of the Year and Best Rap/Sung Performance and is such a feel good song.

“Psycho” is Post Malone’s highest-charting song on the Billboard Hot 100 to date. The song, which features Ty Dolla $ign was released in 2018 as the second single from the album, Beerbongs & Bentleys. The song made its debut on the Hot 100 Chart at position two where it stayed for five consecutive weeks before peaking at top position on its eleventh week on the chart. The song explores Post Malone’s lifestyle and Lyrically, it is about Malone’s lifestyle and is a masterpiece to this day.

“Sunflower” was recorded as the original soundtrack for the movie, Spider-Man: Into the Spider-Verse. The track was released in 2018 and it features Swae Lee from Rae Sremmurd. The song features some catchy lyrics and brings a sense of emotion and heroism, just what you expect for a Spider-Man movie.

“Circles” would be one of the most appropriate tracks to listen to on a breezy summer day or summer night as you hit the road with your friends. It is one of the most popular tracks from his 2019 album, Hollywood’s Bleeding. The song peaked at position one on the Billboard Hot 100 where it remained at top spot for three weeks. The song was also nominated for Best Rock Song at the 61st Annual Grammy Awards and has been certified platinum in multiple countries including the US, Canada and Australia.

In this track, Post Malone reminisces on his high school breakup experience. “I Fall Apart” is the second single from Post Malone’s debut studio album Stoney. The song peaked at number 16 on the US Billboard Hot 100 and 19 on the UK singles chart and had a viral performance released on Facebook and Twitter where the performance garnered more than 200,000 retweets.

The favorite part of this track is towards the end where Post Malone sings without any auto tune. In my opinion, “Go Flex” is Post Malone’s most underrated track. The track features some intelligent lyrics and the instrumentals are quite amazing. “Go Flex” was released in 2016 and is the ninth track from his debut studio album Stoney. The song has an amazing video which features Lia Marie Johnson. Since its release the video has amassed over 360 million views on YouTube.

Most hip-hop fans will probably argue that this song should have featured much higher on our list. The song was released as the first promotional single from Malone’s debut studio album Stoney. “Congratulations” is a triumphant song whose inspiration came from watching the 2016 Olympic Games.The song peaked at position eight on the US Billboard Hot 100 and was certified ten times platinum by the (RIAA).

Post Malone has produced a lot of great music for the past five years or so but “Goodbyes” is one of those songs that you cannot get tired of listening to. The track features vocals from Young Thug and is the second song from his 2019 album, Hollywood’s Bleeding. The song peaked at position 7 on the Billboard Hot 100 and it was also his 6th number-one track on Billboard’s Rhythmic Chart.

Who knew that Post Malone could write such a heartbreaking song. This track talks about a post-breakup situation between a couple and how they convince each other they are okay without each other. The song was released in 2018 as the second single from Post Malone’s second studio album Beerbongs & Bentleys and it’s Post Malone’s fourth song to top the Billboard Hot 100 songs chart. “Better Now” was nominated for Best Pop Solo Performance at the 61st Annual Grammy Awards and featured among Spotify’s Best Songs of 2018.

“White Iverson” never gets old. However, this rap track and its longevity at the top is quite extraordinary. The song was released in 2016 as an official single from his debut studio album Stoney. The song peaked at number 14 in the United States and reached the top 40 in several other European and Scandinavian countries. Since it’s release, the song has amassed over 900 million views on YouTube.