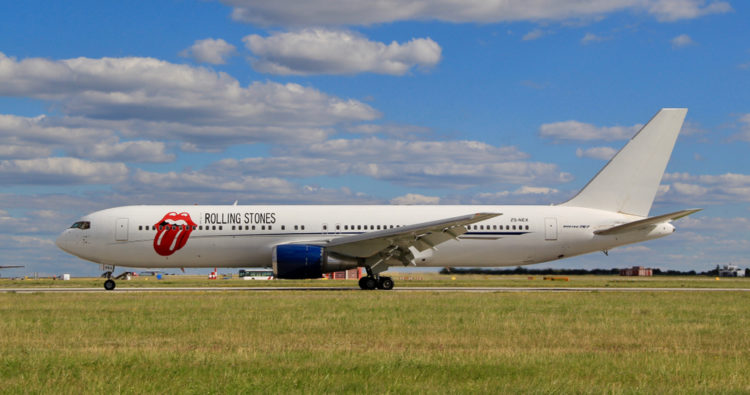 There have been a lot of bands, which in turn, means that there have been a lot of band logos. Some of those logos have been more memorable than the rest. For instance, the Rolling Stones logo is well-known, so much so that it is a serious contender for the position of the single most famous logo in not just rock and roll but all of the popular music of the 20th and 21st centuries. For those who are unfamiliar, the Rolling Stones logo is sometimes called either the Hot Lips logo or some version of the tongue and lips logo. This is because it consists of a pair of red lips that have opened to let the red tongue stick out, thus revealing an upper row of white teeth in the process. The Rolling Stones logo has been in use for five decades and counting, so it should come as no surprise to learn that there is more than one version out there. To name an example, the band changed the logo from red to black for the purpose of remembering their drummer Charlie Watts, who passed away on August 21 of 2021.

How Did the Rolling Stones Logo Come Into Existence?

As strange as it sounds, the Rolling Stones didn’t always have the Rolling Stones logo. After all, the band was founded in 1962. Meanwhile, the Rolling Stones logo was created because the band needed something to represent their 1970 European Tour but was unsatisfied by the various options presented to them by their record company. Instead of just waiting on the record company to come up with something else, the band decided to take matters into their own hands by hiring a design student to do some design work. The individual who was chosen was John Pasche, a third-year student going for his Master of Arts degree at the Royal College of Art who had managed to catch Mick Jagger’s eye because of his final degree show. Famously, it has been said that the Rolling Stones logo was inspired by Kali because Jagger outright suggested using Kali’s tongue in some way. Those who are unfamiliar should know that said figure is a Hindu goddess who is often depicted with a number of notable characteristics. For example, she tends to be shown in either a four-armed form or a ten-armed Mahakali form. Similarly, she is described as being black-skinned but tends to be depicted as being blue-skinned. However, Kali is best-known for the characteristics that make her wrathful nature clear, with examples including but not limited to her red eyes, her garland of human heads, her skirt of human arms, one of her hands holding a severed head, and another one of her hands holding a skull-cup with which to catch the blood from the severed head.

On the whole, Kali sounds terrifying because she is supposed to be terrifying. However, it is important to note that her wrath falls upon the wicked. In particular, Kali is famous for vanquishing the demon Raktabija who could create a duplicate of himself from every single drop of his blood that fells upon the ground by collecting the blood as well as devouring the duplicates. Unfortunately, her bloodlust was also said to be capable of getting out of control, with the result that she had to be calmed down by her husband Shiva who laid down on the battlefield so that she would step upon him. Something that caused her to break out of her bloodlust. Often-times, Kali sticking out her tongue is interpreted as a sign of her embarrassment at stepping upon her husband, which means exactly that in some parts of the Indian subcontinent. In any case, while the Rolling Stones logo was inspired by Kali’s tongue, it took things in a very different direction. To a considerable extent, this was intentional on Pasche’s part. Those who are unfamiliar should remember that the counterculture of the 1960s took inspiration from a wide range of things that happened to include Hinduism. As such, there were a lot of bands at the time using a lot of Hindu imagery. As such, Pasche was concerned that if he just straight-up used Kali’s tongue, the result would be something that became very dated very fast. Instead, he took inspiration from it before going his own way, thus creating a symbol that combined the anti-authoritarianism as well as the sexuality that are both so fundamental to rock and roll music.

Having said that, it is important to note that Pasche wasn’t quite finished with the design-work by the time it was needed. Thanks to this, the illustrators at Craig Braun’s Sound Packaging Corporation had to finish it by making various changes. One would be a narrower tongue. Another would be the addition of black for the purpose of highlighting separate elements. Both versions went on to see use in various places in various ways. As for compensation, Pasche received an intial payment of £50 in 1970. Later, he was paid another £200 in 1972. Even later still, Pasche sold his copyright for his version of the Rolling Stones logo to the band’s commercial arm Musidor BV in exchange for £26,000 in 1984. Finally, he sold his original artwork for the Rolling Stones logo in 2008 as well for a sum of $92,500 from the Victoria and Albert Museum. Moving on, it is also worth mentioning that the Rolling Stones hired Shepard Fairey to update their logo for their 50th anniversary in 2012. Perhaps unsurprisingly, he was quite overwhelmed by being the band’s choice in spite of all of the other designers out there. However, while some designers might have tried to come up with something new in an attempt to make themselves known. Fairey made a conscious decision to stick to the best-known elements of the Rolling Stones logo, which makes sense because it was meant to accompany a major anniversary in the band’s long career rather than some kind of reinvention of the band itself.