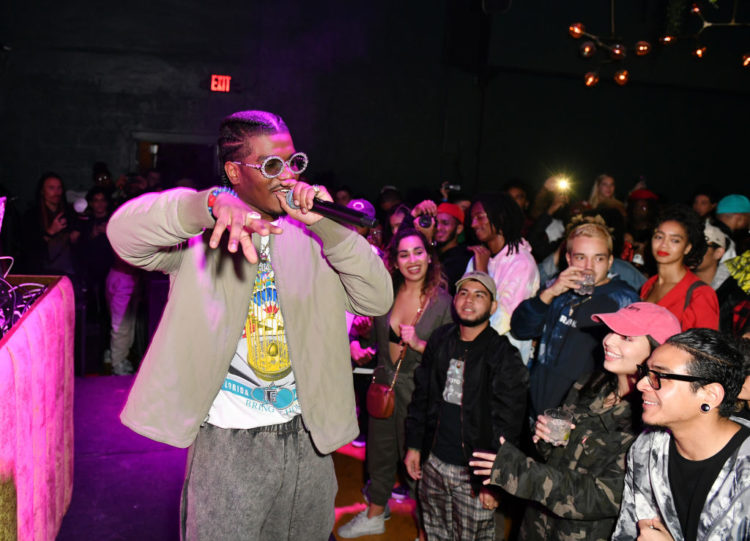 Chris “Smino” Smith Jr. was born October 2, 1991, in St. Louis, Missouri. He learned to play drums in a local church group. Additionally, he was raised in a musical family that exposed him early to various genres, including jazz, blues, and gospel music. Before going solo, he was a member of the rap duo Young Dumb and Outta Control. These are 10 things you didn’t know about Smino.

Even before he got famous, he felt his life was like a movie. In an interview with Vibe, he said that he feels like he has always had things going on. Additionally, he said that some of the more insisting things seem like they were from movies. In the interview, he said, “A lot of the Bill Bellamy a** sh*t that happened in How to Be A Player happens to me, so it’s like a really just like funny a** movie.”

Smino feels that ages eighteen to twenty-three were the most crucial years. That’s when he moved from St. Louis to Chicago. Additionally, he thinks that being out on his own gave him an entirely new perspective. Moreover, he created a second family in the Chicago music scene, where he cemented his passion for music. He also looks at the time when he was finally standing on his own despite having people around him. It was a pivotal time in his life because he learned who to trust and, above all, to trust himself.

During his downtime, he behaves like anyone else, trying to decompress. He enjoys simple things like hanging out with his girlfriend, ordering takeout, playing video games, or binge-watching tv. Additionally, he enjoys spending time with friends outside the studio and just relaxing. Most of all, he enjoys spending time with his girlfriend and living life as it should be. However, aside from going to shows and performing, he lives each day to the fullest and enjoys what he does so much that the only thing he misses is home comforts.

According to Highsnobiety, Smino talked about his early career and how much he has already achieved. Mostly he feels that it was his hard work and dedication backed up by his Chicago family and early mentors like his father. When he was in high school, he was voted most likely to be famous and best rapper. Additionally, he knows he hasn’t always possessed the talent he has, but continuing to work on it has contributed to his fame. He’s not shy about saying he worked night and day to be where he is today.

His album NOIR was Smino’s life as a movie in rap form. So, a lot of conversations are steered towards questions about the film. At one point, he was asked what movie he’d want to star in if given a chance. The rapper didn’t hesitate when he said 1995’s Independence Day. However, he was also quick to point out changes he would make. One of the things he wanted to do is change the spaceship’s name to The Lovecraft. He feels the movie may have been better if aliens and humans revisited the free love era of the 60s together in outer space.

Even though Chicago and St. Louis were the driving influences in his career, he moved to Los Angles for some distance to reflect. Additionally, he likes being close to the airport to leave whenever he feels like it to find another spot to gain perspective on his life. One day, he wants to move to West or South Africa.

In an interview with Wonderland magazine, Smino talked about starting a literacy program for inner-city kids. He understands that many children don’t receive the kinds of breaks that he did and, more often than not, aren’t given the tools to succeed. He wants his program to connect children with positive role models, including Smino. Additionally, he feels blessed he has received so much positive influence during his career and wants to pass that on to others who may wish to follow in his footsteps.

Besides being a rapper, Smino has also become an entrepreneur. In 2017, he was on tour and trying to keep ahold of the bandannas. He had to keep his hair in place during shows. When he couldn’t find one, he wondered if he could put a satin lining into the hood of his sweatshirt to accomplish the same thing. The moment of frustration turned into a product line which Zero Fatigue retails. The original item has already earned Smino an additional six figures in revenue. This is just one piece of what Smino wants to accomplish. He understands his music and performances draw fans in, but he also wants to be thought of as a businessman. Since he came from dropping out of college and sleeping in record studios during his upcoming years, his goal is certainly attainable.

According to Forbes, Smino knows that even though music comes naturally, there are other things he has had to work on. One of the things is balancing his spending. As his career has progressed, he’s learned better ways to invest his money and continually put money back into his brand. Moreover, he continuously learns business ideas that will help take him to new heights and create a lasting and lucrative career. Even though spending wisely and investing is essential, he ended the interview by saying, “If I’m 80 years old and I can book a show, walk on stage, play a hit, and everyone is still singing it, that’s success to me.”

While on the road, Smino keeps a journal. He feels that it helps him stay grounded and centered. Additionally, he writes about experiences and dates them to look back and see how he was feeling. It has also helped him learn more about himself and has been an inspiration for his music.