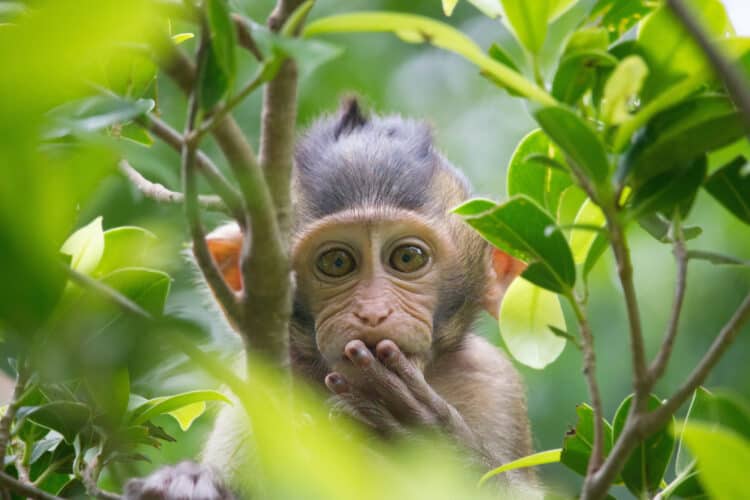 Artists, musicians, and songwriters use many themes as inspiration for their music. If they are animal lovers, it is not uncommon for them to use animals. Another reason they use animals as a focus for their music is many animals have characteristics they share with humans, so the use of an animal is sometimes a symbol of personality traits. One animal that features in many songs is a monkey. These playful creatures share many behaviors with humans, so it is unsurprising that they feature in the lyrics of so many songs. Here are 10 awesome songs about monkeys.

‘Shake Me Like a Monkey’ is a 2009 song recorded by Dave Matthews Band, and it was included on their album ‘Big Whiskey & the GrooGrux King.’ Song Facts says that they released this song after the sudden death of their saxophone player, LeRoi Moore. After Moore was killed in a quad bike accident, the group began looking for music they had recorded with the sax player that they could release, and ‘Shake Me Like a Monkey’ was one of their choices. The song invites the listener to get up and do something with their life and have some fun.

Chuck Berry wrote and recorded ‘Too Much Monkey Business’ in 1956. It was his fifth single and the third track on his first solo LP, ‘After School Session.’ Chuck Berry was backed by Johnnie Johnson on the piano, Willie Dixon on double bass, and Fred Below on drums. Many other artists have recorded covers of the song, including Elvis Presley, the Beatles, The Hollies, and The Youngbloods. It has also influenced many other songs, including Johnny Thunders’s ‘Too Much Junkie Business, Bo Diddley’s ‘A Mix of Pills,’ Michael Jackson’s ‘Monkey Business,’ and Bob Dylan’s ‘Subterranean Homesick Blues.’

‘Monkey Wrench’ is a 1997 song by The Foo Fighters that was the lead single from their album ‘The Colour and the Shape.’ The song was nominated for a Grammy Award for the Best Hard Rock Performance. It was written by Dave Grohl, Nate Mendel, and Pat Smear. Grohl said that the song is about realizing you are the source of a problem in a relationship and freeing the other person.

The song is about a train engineer who traveled with a monkey as his companion. When the engineer steps off the train for a break, the monkey hijacks the train. Fortunately, the switch operator gets the message in time and takes control of the situation. The song is on the tracklist for The Grateful Dead’s 1991 album ‘Reckoning.’

‘Monkey Man’ is one of the tracks from The Rolling Stones’ 1960 album ‘Let It Bleed.’ When the song was first released, it did not garner a lot of attention. However, the song later became noticed when it was used in the 1990 Martin Scorcese film ‘Goodfellas.’ The Rolling Stones then began playing the track on their ‘Voodoo Lounge Tour’ during the mid-1990s. It then featured on the band’s 2016 album ‘The Rolling Stones in Mono.’

Brass Monkey is the name of a cocktail that was once popular, especially at hip hop parties. The American rap rock group Beastie Boys recorded a song about the drink in 1987, and it is featured on the album ‘Licensed to III’ and the compilation album ‘Solid Gold Hits.’ ‘Brass Monkey’ peaked at 48 on the Billboard Hot 100.

‘Monkey Gone to Heaven’ is another song that uses a monkey as a metaphor. In this case, the monkey refers to the human race, and the song is about how humans have damaged the planet. The lyrics cover the ozone layer, the greenhouse effect, and pollution. The song was recorded by Pixies in 1988, and it was featured on the album ‘Dolittle’ the following year. It reached number five on the US Alternative Airplay chart.

Peter Gabriel recorded ‘Sock the Monkey’ in 1982, and it was the second single from his fourth self-titled studio album. It was Gabriel’s first Top 40 hit in the United States, and it topped the Billboard Hot Mainstream Rock Tracks chart. Many fans of the song believed it was about animal rights. However, Gabriel said it was about love, and that monkey is a metaphor for jealousy.

2. Tweeter and the Monkey Man, The Traveling Wilburys, 1988

Although the title mentions a monkey man, the character has nothing to do with animals. Tweeter and the Monkey Man are two criminals that are being pursued by an undercover cop, and the crime song is set in New Jersey. The lyrics of the song include several song titles of Bruce Springsteen hits, including ‘State Trooper’ and ‘Thunder Road.’ The song was on the album ‘Traveling Wilburys Vol. 1.’

1. Everybody’s Got Something to Hide Except For Me and My Monkey, The Beatles, 1968

The lyrics of ‘Everybody’s Got Something to Hide Except For Me and My Monkey’ is seemingly unclear to even those who wrote the song. While Lennon claimed that the monkey refers to Yoko Ono, Paul McCartney said that it was about heroin, which was something Lennon was using at the time. The track featured on the group’s 1968 self-titled album.